The Mysterious Piri Reis Map: The Evidence of a Very Advanced Lost Civilization? 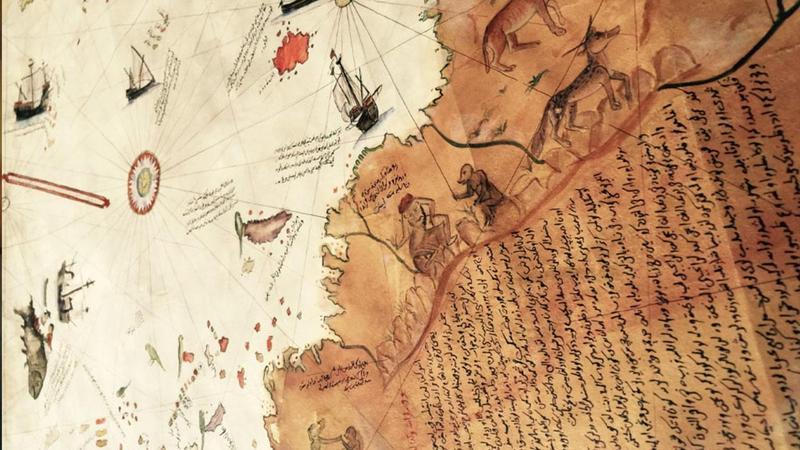 The Piri Reis map is a world map compiled in 1513 from military intelligence by the Ottoman admiral and cartographer Piri Reis.

Approximately one third of the map survives; it shows the western coasts of Europe and North Africa and the coast of Brazil with reasonable accuracy. Various Atlantic islands, including the Azores and Canary Islands, are depicted, as is the mythical island of Antillia and possibly Japan.

The historical importance of the map lies in its demonstration of the extent of exploration of the New World by approximately 1510, and in its claim to have used Columbus’s maps, otherwise lost, as a source.

It used ten Arab sources, four Indian maps sourced from the Portuguese, and one map of Columbus. More recently, it has been the focus of pseudo historic claims for the pre-modern exploration of the Antarctic coast.

The map was discovered accidentally on 9 October 1929, through the philological work of the German theologian Gustav Adolf Deissmann (1866–1937). He had been commissioned by the Turkish Ministry of Education to catalog the Topkapi Palace library’s non-Islamic items.

At Deissmann’s request to search the palace for old maps and charts, the director Halil Edhem (1861–1938) managed to find some disregarded bundles of material, which he handed over to Deissmann. Realizing that the map might be a unique find, Deissmann showed it to the orientalist Paul Kahle, who identified it as a map drawn by Piri Reis.

The discovery caused an international sensation, as it represented the only then known copy of a world map of Christopher Columbus (1451–1506), and was the only 16th-century map that showed South America in its proper longitudinal position in relation to Africa. Geographers had spent several centuries unsuccessfully searching for a “lost map of Columbus” that was supposedly drawn while he was in the West Indies.

After reading about the map’s discovery in The Illustrated London News, United States Secretary of State Henry L. Stimson contacted the United States Ambassador to Turkey Charles H. Sherrill and requested that an investigation be launched to find the Columbus source map, which he believed may have been in Turkey.

In turn, the Turkish government complied with Stimson’s request, but they were unsuccessful in locating any of the source maps.

The Piri Reis map is currently located in the Library of the Topkapı Palace in Istanbul, Turkey, but is not usually on display to the public.

The map is a portolan chart, as shown by the four compass roses (two large and two small) from which lines of bearing radiate. Some analyses assert that the map is an a zimuthal equidistant projection centered on Cairo, but a 1998 analysis by Steven Dutch of the University of Wisconsin Green Bay shows a better fit with a point near the intersection of the present-day prime meridian and the equator.

There are extensive notes in Turkish around the edges of the map, as well as some interior detail which is mostly inaccurate and fanciful.

The Iberian peninsula and the coast of Africa are rendered accurately; as for the Americas, the northern portion of the South American coast is also fairly accurate and positioned correctly with respect to Africa. Much of the Caribbean is also mapped fairly accurately and appears to reflect Columbus’s maps of the area.

The area representing North America bears almost no resemblance to its real coastline (which is unsurprising, since by this time, it was still almost totally unexplored) except for one projection which might be Newfoundland; an island labelled “Antilia” may actually be Nova Scotia, since it has a note attached which refers to the legendary voyages of Saint Brendan.

There is some suggestion that this area may represent the Asian coast. Island groups in the east Atlantic are accurately placed, but are depicted out of scale.

Although there are frequent claims for the extreme accuracy of this chart, McIntosh, in comparing the Piri Reis map to several other portolan-style maps of the era, found that

The Piri Reis map is not the most accurate map of the sixteenth century, as has been claimed, there being many, many world maps produced in the remaining eighty-seven years of that century that far surpass it in accuracy. The Ribeiro maps of the 1520s and 1530s, the Ortelius map of 1570, and the Wright-Molyneux map of 1599 (‘the best map of the sixteenth century’) are only a few better-known examples.

There are two major discrepancies from known coastlines: the North American coast mentioned above, and the southern portion of the South American coast. On the Piri Reis map, the latter is shown bending off sharply to the east starting around present-day Rio de Janeiro.

A more popular interpretation of this territory has been to identify this section with the Queen Maud Land coast of Antarctica. This claim is generally traced to Arlington H. Mallery, a civil engineer and amateur archaeologist who was a supporter of pre-Columbian trans-oceanic contact hypotheses. Though his assertions were not well received by scholars, they were revived in Charles Hapgood’s 1966 book Maps of the Ancient Sea Kings.

This book proposed a theory of global exploration by a pre-classical undiscovered civilization based on his analysis of this and other ancient and late-medieval maps. More notoriously, these claims were repeated in Erich von Däniken’s Chariots of the Gods (which attributed the knowledge of the coast to extraterrestrials) and Gavin Menzies’s 1421: The Year China Discovered the World (which attributed it to supposed Chinese voyages), both of which were roundly denounced by both scholars and debunkers of fringe works, but which attracted huge popular followings.

A more sober analysis of these claims was published by Gregory McIntosh, a historian of cartography, who examined the map in depth in his book The Piri Reis Map of 1513 (Athens and London: University of Georgia Press, 2000). He was able to find sources for much of the map in Columbus’s writings.

Certain peculiarities (such as the appearance of the Virgin Islands in two locations) he attributed to the use of multiple maps as sources; others (such as the errors in North American geography) he traced to the continued confusion of the area with East Asia. As far as the accuracy of depiction of the supposed Antarctic coast is concerned, there are two conspicuous errors.

First, it is shown hundreds of miles north of its proper location; second, the Drake Passage is completely missing, with the Antarctic Peninsula presumably conflated with the Argentine coast. The identification of this area of the map with the frigid Antarctic coast is also difficult to reconcile with the notes on the map which describe the region as having a warm climate.

It should be kept in mind that maps of the period generally depicted a large continent named Terra Australis Incognita of highly variable shape and extent. This land was posited by Ptolemy as a counterbalance to the extensive continental areas in the northern hemisphere; due to a lack of exploration and various misunderstandings, its existence was not fully abandoned until circumnavigation of the area during the second voyage of James Cook in the 1770s showed that if it existed, it was much smaller than imagined previously.

The first confirmed landing on Antarctica was not until 1820, and the coastline of Queen Maud Land did not see significant exploration before Norwegian expeditions began in 1891. In 1513, Cape Horn had not yet been discovered, and indeed Ferdinand Magellan’s voyage of circumnavigation was not to set sail for another six years.

It is unclear whether the mapmaker saw South America itself as part of the unknown southern lands (as shown in the Atlas Miller), or whether (as Dutch thought) he drew what was then known of the coast with substantial distortion, but in any case, serious scholarship holds that there is no reason to believe that the map is the product of genuine knowledge of the Antarctic coast.