The Legend Of The Morbach Werewolf 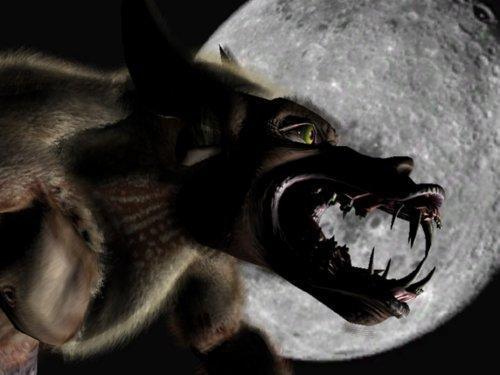 According to legend, the Rhineland town of Wittlich is said to be the last place in Germany where a werewolf had been killed.

Thomas Johannes Baptist Schwytzer, a supposed deserter from Napoleon’s army and a veteran of the disaster at Moscow, is fleeing to his homeland in Alsace, France. With him are a group of Russians, also deserters. While passing by the village of Wittlich, the hungry soldiers earmark a farmhouse and decide to take what they want. In the midst of their scavenging they are discovered by the farmer, whom they promptly murder along with his sons.

The farmer's wife, witnessing the foul deed, lets out a wail and curses Schwytzer.

"From now on at each full moon you will change into a rabid wolf!" she screams in her anguish.

Schwytzer relieves her suffering by crushing her skull.

As times goes on, the curse starts to take hold. Gradually a change comes over Schwytzer...his personality becomes harder and without inhibitions. He robs, rapes, and murders at his pleasure. He soon departs from his fellows who have had enough, and takes up with bandits and highwaymen. The ruffians are appalled at Schwitzer's excesses, so the ex-soldier flees to the sanctuary of the deep forests.

There the tales of a wolf that walks like a man spreads throughout the countryside. At night men and cattle are brutally slaughtered by the beast.

One night Schwytzer observes the beautiful daughter of a local farmer. Her name is Elizabeth Beierle, and in his carnal lust he rapes her.

Days later, while by his campfire in the woods, Schwytzer is discovered by a group of villagers who take him for the werewolf. They give chase and corner the fugitive near the village of Morbach. Promptly dispatching Schwytzer, the villagers bury him at a crossing. There a shrine is erected where a candle will burn continually. As long as the candle is lit, so the legend goes, the werewolf will not return.

Nine months later, a son is born to Elizabeth Beierles, whom she names Martin. To this day the descendants of this bastard child are a respected family in the vicinity of Morbach, and show no sign of the curse of their infamous ancestor, Thomas Johannes Baptist Schwytzer.

One evening a group of Air Force personnel are returning to their base at Morbach. Passing the old shrine they notice the candle is out. They begin to laugh and joke about this, for all have heard of the legend of the werewolf.

Later, at the base, automatic sirens peal into the night...sensing someone or something has activated the perimeter fence. While investigating, a security guard detects a large creature, similar to a wolf, standing on its hind legs. It gazes at the soldier for a moment and then flees, clearing a 3 meter fence with ease.

A police dog is brought to track the beast, but upon arriving at the spot where the werewolf was seen, the canine cowers and howls, refusing to go further.

by Phantoms And Monsters