The Argument On Vegetarianism In Tibet 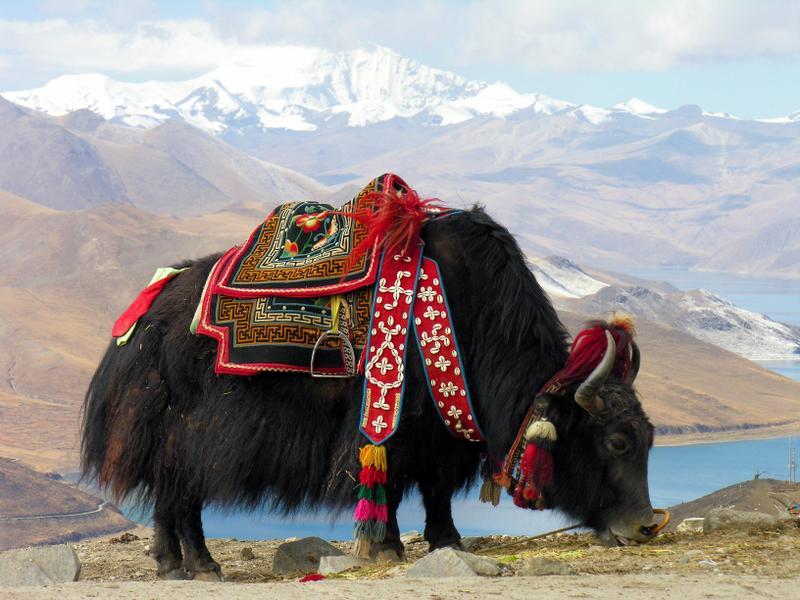 The dilemma of vegetarianism was a vexed one for Buddhists in Tibet, where the large alpine landscape is acceptable for nomadic herding and a meat-and-dairy-based diet. A folk story recounted by American writer Lama Surya Das from the publication The Snow Lion's Turquoise Mane exemplifies the tension between the Tibetan diet and Buddhist ideal of compassion. From the narrative, a sheep, an ox, and a goat listen from outside the monastery's walls to the great lamas and scholars debating the dilemma of vegetarianism. The animals are inspired to reverence and religion by the compassionate prognosis articulated from the argument, just to be picked one by one for slaughter during the lunch break. Ideals and practicalities clash as it gradually dawns on the animals the compassionate outlook espoused in the Buddhist teachings doesn't necessarily apply to"all sentient beings" in practice.

In theFood of Sinful Demons: Meat, Vegetarianism, and the Limits of Buddhism in Tibet, Geoffrey Barstow of Oregon State University tackles the history of vegetarianism in Tibet, surveying the multifaceted arguments of its proponents throughout the centuries. His in depth study relies on a broad swath of texts, such as biographies of distinguished masters, rulebooks for individual monasteries, and literature about the "three vows," which discusses the connection between the monastic code (Vinaya), the bodhisattva vow to benefit all sentient beings, and the samaya vow taken by Vajrayana initiates. These vows offer different and often contradictory viewpoints on meat-eating, complicating the formula of a coherent Buddhist position on this particular issue in Tibet. Barstow dedicates one chapter to every vow and its consequences for meat-eating in accordance with major Buddhist masters from various Tibetan traditions. This permits him to delve into particular aspects of the vegetarian argument in detail, but at the expense of a chronological sense of these ideas' development and the lived contexts where particular positions emerged.

For Tibetan Buddhist practitioners in North America, what could be surprising is the pointed criticism of consuming meat in everyday life according to a tantric paradigm. The initial two vows, related to monastic life and the bodhisattva path, are far more clear cut. As Barstow shows the monastic code permits monks and nuns to eat meat as long as they haven't seen, heard, or suspected that the creature was killed specifically for them (the tale above clearly violates this rule). However, the bodhisattva vow supersedes this in its own compassionate concern for all sentient beings along with the call for vegetarianism in many Mahayana sutras (including the Lankavatara Sutra andMahaparinirvana Sutra). That is, in large part, why Buddhist monastics in China have mainly been vegetarian. Further complicating matters, the samaya vow mandates the usage of meat and liquor in tantric feasts as a means to surpass the thoughts of purity and impurity. This creates a strain with Mahayana ideals by appearing to sanction meat-eating, though the mandate only applies in particular ritual contexts and to specific rare and repulsive types of meat.

In addressing such contradictions, Barstow deftly illuminates a selection of positions: from advocacy for vegetarianism that still requires the usage of a token amount of meat through tantric feasts (by the 18th-century Nyingma visionary Jigme Lingpa and 17th-century Kagyu master Karma Chakme) to permitting meat-eating as medication when sick (most famously, the19th-century Nyingma hermit Shabkar Tsokdruk Rangdrol) to strict vegetarianism in all contexts (for instance, Norchen Kunga Zangpo, the 15th-century founder of the Ngor branch of the Sakya tradition, along with the Eighth Karmapa Mikyo Dorje, the 16th-century head of the Karma Kagyu lineage).

Outside the monastery, the parameters were different. Not merely did non-monastic tantric professionals have fewer limitations on diet and behavior --they frequently married, and dwelt as householders--but other cultural orientations held sway.

Barstow breaks new ground in his talk of the usage of meat for medical purposes and as an element of a heroic masculine ideal. The Tibetan medical tradition asserts the necessity of meat for energy and urges the usage of particular kinds of meat to deal with specific ailments. Meanwhile, a manly ideal exemplified in the Gesar epic valorizes the control and consumption of animals in constituting strength and virility.

In the last chapter, Barstow exemplifies how Tibetans have balanced those varying viewpoints by distancing themselves from the action of slaughter or practicing partial vegetarianism by giving up meat on special holy days or during retreat. He supplies a well-rounded and extensive account of why meat-eating has remained the standard among Tibetans, even monastics, regardless of the powerful Buddhist ethos of empathy for all beings.

Matters have changed lately, however. Improved transport and the introduction of greenhouses have generated a larger assortment of vegetables and other types of protein available. Since the mid-2000s, vegetarianism has gained momentum among Tibetans, encouraged by prominent Buddhist teachers such as Khenpo Tsultrim Lodro at Larung Buddhist Academy in southern Tibet, also among the two claimants to the throne of the 17th Karmapa, Ogyen Trinley Dorje, in exile in India.

In an epilogue, Barstow delves into the possible effect of and controversy about modern vegetarianism but neglects to summarize the wider context that includes an ethical reform movement along with a new set of ten Buddhist virtues promulgated by leaders at Larung Buddhist Academy. This new pair of virtues contains novel pledges to not sell livestock for slaughter; to not smoke, drink, or gamble; to not visit prostitutes; to not fight with weapons or deal in arms; to not steal or hunt; and to not wear fur, all which refocus Buddhist ethics on modern social problems.

Now, vegetarianism has been embraced primarily by Buddhist monastics, with devout lay people giving up meat on special holy days. Therefore it remains to be seen whether Tibetans will make a considerable change in diet and what impact this could have in their way of life. For those following the vegetarian argument as it evolves on the Tibetan plateau and as Buddhism spreads to new contexts, Barstow's publication offers essential reading.