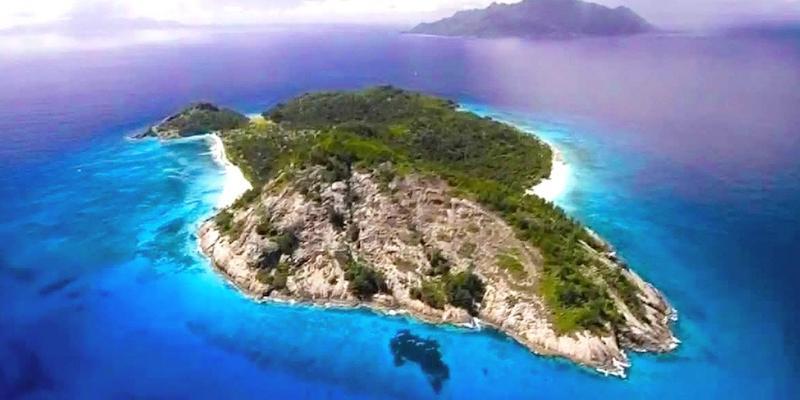 The lost continent of Mauritia likely spanned a great swathe of the Indian Ocean before it was torn apart by indomitable geologic forces and plunged into the sea. Now, a good chunk of it may have been found.

In 2015, researchers visited the island of Mauritius, east of Madagascar, to study volcanic rocks. While there, they unearthed something unexpected. Embedded in the rocks were ancient crystals, dated up to three billion years old—300 times older than the island’s young volcanic surface.

Rocks this old come from Earth’s continents, but there aren’t any continents around Mauritius. It's surrounded by boundless sea in all directions.

There was just one place left for the researchers to look—down. Their findings, published in the journal Nature Communications, suggest that the curious crystals came from a long-forgotten place buried well beneath the island.

“This exciting and unexpected result can only mean that there is a piece of ancient continent below the young volcanoes of Mauritius,” says the study’s lead author Lewis Ashwal, who researches geoscience at the University of Witwatersrand in Johannesburg, South Africa.

The idea that a massive slab of missing land may lie under Mauritius was first suggested by Ashwal in 2013. Among the island’s sandy beaches, Ashwal and his team found minuscule zircon crystals that were nearly 2 billion years old, raising his suspicions about the not-so-mythical continent. But detractors argued that the microscopic crystals could have traveled to the beach in any number of ways—no matter how unlikely—and it was simply impossible to prove those alternatives wrong.

Perhaps a primordial crystal from Africa lodged in a bird’s feathers and serendipitously fell to the ground, for example. “There were many skeptics in the science community who criticized our suggestion because they felt that zircons on the beach sand could have been transported there by winds, or ocean currents, or birds, or vehicle tires, or by people’s shoes,” says Ashwal.

But after finding ancient zircon crystals implanted in the island’s rock, Ashwal confidently put those skepticisms to rest.

The island of Mauritius is blanketed in volcanic rock, which is (geologically speaking) pretty young at nine million years of age. It’s strange that the zircon crystals, which are so much older, are embedded in this youthful rock, but Ashwal has an idea about how they got there. Nine million years ago, when volcanic magma oozed out Earth’s mantle, it passed through the buried lost continent before continuing to the surface and spewing lava everywhere, explains Ashwal. The zircon crystals, too tough to melt, simply hitched a ride up. They’ve sat on the surface ever since, waiting patiently to tell scientists Mauritia’s secret.

The discovery of this buried continental slab is fascinating in itself, but it also reveals a better account of Earth’s eventful past, as continents have collided and split apart over time. Ashwal points to the supercontinent Gondwana, which once encompassed Africa, India, Madagascar, Australia, and Antarctica. It began to tear apart 200 million years ago, much like Somalia, Ethiopia, Kenya, and Tanzania are splitting away from Africa today to form the East African Rift Valley—which may one day be filled by an ocean.

But when Gondwana split apart, sending our familiar continents to their present locations, the break-up may not have been so clean. “Our work shows that continental break-up is more complex and messy than previously thought, and can result in continental fragments of various sizes, littering the ocean floor,” explains Ashwal. For all its glory as a former continent, Mauritia could be considered a massive piece of continental litter.

Not all the remnants of this messy break-up disappeared. Before its tragic submergence, Mauritia may have once been connected to Madagascar. Ashwal compared the ancient zircons found on Mauritius to the ages of rocks in other places, like India and Africa, and he found the “best match” in Madagascar.

Anytime someone claims to have discovered a long-lost land, it’s certainly wise to raise a skeptical eyebrow. But in this case, there’s little doubt. “I’m quite convinced,” says Calvin Miller, who studies earth sciences at Vanderbilt University and was not involved in the study. Miller says the profoundly old ages of the zircon crystals certainly imply that they came from bona fide continental crust. He does, however give some caution to how the crystals might have become embedded in such young rock. Ashwal's notion that molten rock carried the crystals up through ancient crust is "not quite ironclad,” says Miller. “But it would be my favorite interpretation, too.”

It’s also unclear how much of the lost continent actually lies beneath the island of Mauritius. “They’ve found ancient crystals surrounded by younger rocks,” explains John Valley, who studies geoscience at the University of Wisconsin-Madison but didn't participate in the recent study. “But they haven’t yet found any of the older rocks.” Although the crystals provide valuable evidence for the existence of this submerged land, how much of it lies down there remains a mystery. “It could be a massive buried continent, or just trace amounts of zircon crystals,” says Valley.

Regardless of how much land lurks three to six miles beneath the island, Ashwal thinks that most of Mauritia is strewn about the floor the Indian Ocean, cast into other shoals, ridges, and banks. But at least we know it's out there.

“It’s not every day that a new piece of continent is discovered, even though this one is buried and we cannot see or touch it,” says Ashwal.