Safety in Numbers — Why Do We Feel the Need to Conform 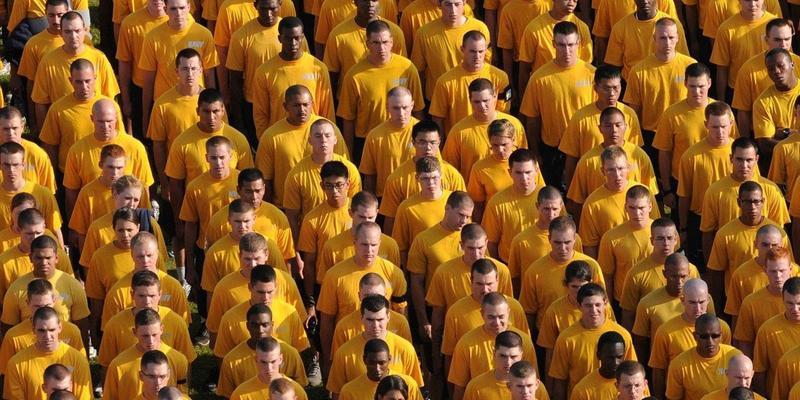 Imagine yourself in this situation: You've signed up to participate in a psychology experiment in which you are asked to complete a vision test.

Seated in a room with the other participants, you are shown a line segment and then asked to choose the matching line from a group three segments of different lengths.

The experimenter asks each participant individually to select the matching line segment. On some occasions everyone in the group chooses the correct line, but occasionally, the other participants unanimously declare that a different line is actually the correct match.

So what do you do when the experimenter asks you which line is the right match? Do you go with your initial response, or do you choose to conform to the rest of the group?

In psychological terms, conformity refers to an individual's tendency to follow the unspoken rules or behaviors of the social group to which he or she belongs. Researchers have long been interested in the degree to which people follow or rebel against social norms.

Asch was interested in looking at how pressure from a group could lead people to conform, even when they knew that the rest of the group was wrong. The purpose of Asch's experiments? To demonstrate the power of conformity in groups.

How Were Asch’s Experiments Carried Out?

In each experiment, a naive student participant was placed in a room with several other confederates who were "in on" the experiment. The naive subjects were told that they were taking part in a "vision test." All told, a total of 50 students were participants were part of Asch’s experimental condition.

There were 18 different trials in the experimental condition and the confederates gave incorrect responses in 12 of them, which Asch referred to as the "critical trials." The purpose of these critical trials was to see if the participants would change his answer in order to conform to how the others in the group responded.

During the first part of the procedure, the confederates answered the questions correctly. However, they eventually began providing incorrect answers based on how they had been instructed by the experimenters.

The study also included 37 participants in a control condition. This involved having each participant give their response to the line task with only the experimenter in the room and no group of confederates.

Results of the Asch Conformity Experiments

Nearly 75 percent of the participants in the conformity experiments went along with the rest of the group at least one time. After combining the trials, the results indicated that participants conformed to the incorrect group answer approximately one-third of the time.

The experiments also looked at the effect that the number of people present in the group had on conformity. When just one other confederate was present, there was virtually no impact on participants' answers. The presence of two confederates had only a tiny effect. The level of conformity seen with three or more confederates was far more significant.

Asch also found that having one of the confederates give the correct answer while the rest of the confederates gave the incorrect answer dramatically lowered conformity. In this situation, just five to ten percent of the participants conformed to the rest of the group. Later studies have also supported this finding, suggesting that having social support is an important tool in combating conformity.

What Do the Results of the Asch Conformity Experiments Reveal?

These results suggest that conformity can be influenced both by a need to fit in and a belief that other people are smarter or better informed. Given the level of conformity seen in Asch's experiments, conformity can be even stronger in real-life situations where stimuli are more ambiguous or more difficult to judge.

Asch went on to conduct further experiments in order to determine which factor influenced how and when people conform. He found that:

Criticisms of the Asch Conformity Experiments

One of the major criticisms of Asch's conformity experiments centers on the reasons why participants choose to conform. According to some critics, individuals may have actually been motivated to avoid conflict, rather than an actual desire to conform to the rest of the group.

Another criticism is that the results of the experiment in the lab may not generalize to real-world situations. However, many social psychology experts believe that while real-world situations may not be as clear cut as they are in the lab, the actual social pressure to conform is probably much greater, which can dramatically increase conformist behaviors.

The Asch conformity experiments are among the most famous in psychology's history and have inspired a wealth of additional research on conformity and group behavior. This research has provided important insight into how, why, and when people conform and the effects of social pressure on behavior.