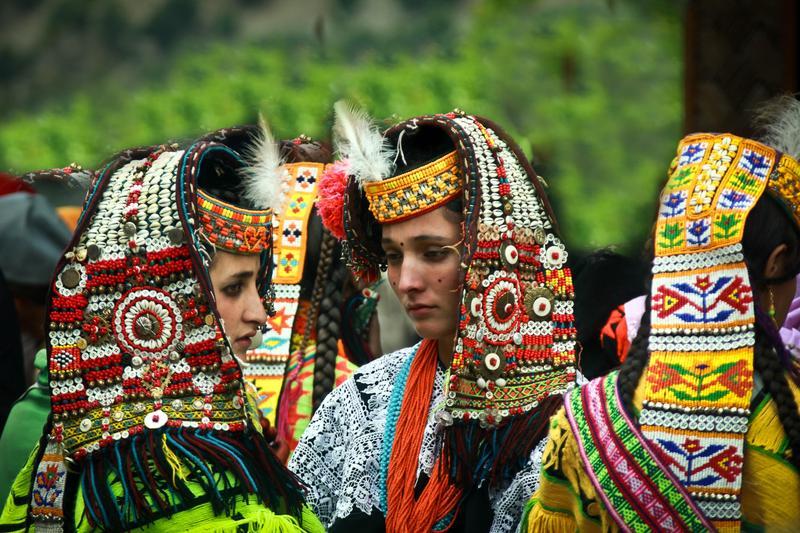 The mysterious Kalash people practice an ancient form of Indo-European paganism in an unbroken tradition having survived against all odds in a remote mountain region of northern Pakistan. The isolated Chitral Valley is home to Dardic people who speak an ancient Indo-European language called Nuristani. This is what remained when the Indo-Iranian and Indo-Aryan subgroups cleaved off after their invasion of the Indian subcontinent. Their religion descends from the Rigvedic period and they have close genetic ties to modern Europeans.

Some of their religious customs echo pre-christian Slavic ones – a cosmic dualism pitting a thunder god against a chthonic rival, a polymorphic fertility deity, animal sacrifice, use of wooden idols and a corpus of nature spirits. Their pantheon even includes a female deity of death named Mara. The women’s clothing bare remarkable resemblance to Slavic folk costume, especially the Ukrainian type. Watching the videos below you will notice their use of sun-wheels, the eight petal flower and even the gromovit znaki.

Whats more, the Kalash have a winter solstice ritual that may yield precious clues to the meaning behind Slavic yule log (Bozic/Badnjak/Budnik) tradition. Here a young boy assumes the role of the polymorphic solar fertility hero by taking to the hills during summer. He returns to his community and completes the rite of passage during the night of the winter solstice. Per Wikipedia,“This includes the Festival of the Budulak (buḍáḷak, the ‘shepherd king’). In this festival, a strong prepubescent boy is sent up into the mountains to live with the goats for the summer. He is supposed to get fat and strong from the goat milk. When the festival comes he is allowed for a 24-hour period only to have sexual intercourse with any woman he wants, including even the wife of another man, or a young virgin. Any child born of this 24-hour period is considered to be blessed. “

This ritual might shed some light on the esoteric meaning behind Slavic winter solstice rites. The blazing kolovrats sent careening down hills comes to mind here. Perhaps the Bozic (meaning ‘little god’), and therefore Jarilo as well, was at once embodied by a real boy chosen by the tribe for his purity and fitness. The log then is not a symbol of the ‘little god’ himself, but of the seed (sperm) he holds. This seed, when germinated by the fires of love and passion, is planted in the earth (womb) on the night of the winter solstice to ensure fertility. This is why Slavs always took the yule log from a young oak – the tree being analogous to the young father, and the log to the seed which (re)creates the son/sun. Might this yield rare glimpses into an Old Slavonic sacred marriage ritual? You decide.

In the meantime, the beautiful Kalash people are in danger of cultural annihilation. Though the Pakistani government now protects their freedom of religion, they face many challenges in the 21st century. Incursions by Muslim missionaries offering young men jobs and other incentives for conversion occur with impunity. Some of the more wealthy Muslim men fetishize the fair Kalash women, and there have been numerous reports of rapes, kidnappings and forced marriages. Unfortunately, European visitors haven’t been much help either. Introduction of Western entertainment has lured many young Kalash away from the Chitral Valley in search of a modern life. What’s more, local legends saying the Kalash were spawned by children of Alexander the Great’s lost Army (which has little basis in reality) have attracted Greek antiquarians who have sought to exploit the myth by constructing Greco-themed tourist attractions.

The Kalash are a resilient people, and though they face many challenges today, this is nothing new for them. If history is any indicator, they will continue to survive and endure – A living testament to the perseverance of Indo-European polytheism, and one that can inspire her world-wide decedents.