Questions About the del Bosco Sacro of Benevento Strega Family 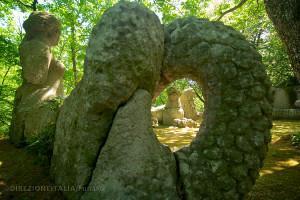 Recently there has been some questions posed by individuals both outside and inside the Strega tradition about the new family that has arrived to the U.S. from Italy, which calls itself the del Bosco Sacro of the Benevento. Since I personally know the individual who has made this visit possible, whose craft name is Lupercus, I have also been introduced to the Arch High Priestess and Arch High Priest whose craft names are Diana and Dianus. Some have even questioned the validity of this new family, but most are just curious about them and want to understand their mission and know who they are and where they came from. They will be making an appearance at Pantheacon, and will be presenting lectures and workshops there, but before that occurs, I thought it prudent to field a handful of basic questions to them so that my readers might have a greater appreciation of who they are and why they are here in the U.S.

Their story is a fascinating one, since few of us have much knowledge about paganism, witchcraft and magick as it is practiced in geographic locations other than the U.S. or the U.K. I know that my knowledge of what is practiced in regards to witchcraft, its history and present disposition in other lands is rather limited to what I have read. So this is a very interesting and exciting occurrence. So let us move on to the questions and the answers that I hope will give them the best possible public face.

What is Stregheria in Italy like and who are the Strega Families?

What family did Diana and Dianus come from and why did they choose to come to this country?

“Diana & Dianus del Bosco Sacro arrived from Benevento, Italy on December 8, 2010 to bring Stregheria del Bosco Sacro of Benevento, a Tradition of the Pre-Pagan shamanic religion of the Great Mother, Diana Lucina, to America as an essential, additional tradition within the modern Pagan movement.”

What initiatory lines do Diana and Dianus hold, and why do they appear to represent multiple areas in Italy simultaneously?

“Diana & Dianus del Bosco Sacro personify four lineages of Italian Stregheria: Janare of Benventano, Masca of Piemonte, Majara of Puglia & Maiare of Sicily. The principle Stregan lineage of Dianus and Diana is Stregheria del Bosco Sacro of Benevento Tradition. As Diana & Dianus have lived in various parts of Italy for employment reasons, they were initiated into various additional local Traditions or Congregations in the various places where they have lived. This is not really at all unusual among Stregans in Italy.”

I notice that they have assumed titles in their role as representatives of the Stregan families. Who gave them these titles and roles, and what do they mean?

“The title of Grand Conservator of Stregan Faith and Traditions was bestowed on Dianus del Bosco Sacro by Stregheria del Bosco Sacro of Benevento in recognition of Dianus’ advanced spiritual attainment as well as his essential role in preserving and transmitting the Stregheria Traditions of Janare of Benventano, Masca of Piemonte, and Majara of Puglia, and Maiare of Sicily.

There is no such thing as any sort of Grand Lodge, etc. and that any and all titles of recognition are given exclusively at the local congregational level. Diana & Dianus do not way pretend to speak for Stregherian traditions other than those they represent and the lineages that they embody.”

Why did Diana and Dianus assume craft names that are associated with deities? (This might be considered an unusual practice in the U.S.)

“The question has arisen as to why we use the names of Goddesses and Gods of Stregheria as our magickal names. Diana, Dianus, Lupercus, and Aegeria are not at all our real magical names in Stregheria. These names instead were given to us by elders of Stregheria del Bosco Sacro of Benevento for all public use in conjunction with our mission in America. Our elders correctly foresaw problems in accomplishing our mission, including magical attack. We were instructed to use these Divine names in all public aspects of our mission in America. This is but a small piece of an entire castle of protection magically erected around us to protect every aspect of our mission. This is, for example, why all clandestine attacks are so easily exposed to the light and neutralized.”

What is the principle mission that Diana and Dianus have assumed in coming to this country?

“The principle mission of APS Diana & AP Dianus is to bring deeper mysteries of The Great Rite out into the open in America. They offer complete initiation and training in The Great Rite, which includes both Egyptian Sexual Alchemy and the Shamanic Sexuality of Stregheria del Bosco Sacro of Benevento.”

What does ‘del Bosco Sacro’ mean?

“The ‘del Bosco Sacro’ are an ancient and noble Stregherian clan, respected by all Clans, Branches, Traditions, and Congregations of Stregheria Italiana Antica. As former guardians of the Sacred Forest of Nemi where the Temple of Diana Lucina once stood, the del Bosco Sacro Tradition has always been guardians of deeper mysteries of The Great Rite.”

What kind of training and initiation does Diana and Dianus seek to provide to those who are chosen? How is the Great Rite presented and what is it’s relationship to the teaching and initiation of the Strega tradition? What are the requirements for initiation and elevation?

“As inheritors of del Bosco Sacro Tradition, APS Diana & AP Dianus have with due authority decided to provide initiation and training in the Mysteries of The Great Rite completely independently and separately from Stregheria. In this manner, deeper mysteries of The Great Rite can be shared with the entire Pagan and Tantric communities and not just with other Stregheria groups. APS Diana and AP Dianus offer 66 distinct levels of initiation, practice, and consciousness in the Great Rite. These encompass both Shamanic Sexuality and Egyptian Sexual Alchemy.

In addition to The Great Rite, APS Diana & AP Dianus also offer initiation and training in Stregheria del Bosco Sacro of Benevento completely separately from the above. Our tradition certainly does not accept everyone for initiation. We require, for example, both prior application and legally binding confidentiality agreement. Compared to other Stregheria Traditions, our Tradition is admittedly rather liberal about admitting probationers to our First Degree. We are, however, extremely elitist regarding who will ever be admitted to our Third Degree or adopted into the del Bosco Sacro family tradition.”

“Our Probationer Degree includes a year and a day of practice and devotion to the Diana Lucina. Beyond this, we will not comment on rituals, grade structure, teachings, requirements etc. of our Tradition as this is oath bound information. We indeed charge modest fees for initiation and training. This is quite necessary to support the mission of Stregheria del Bosco Sacro of Benevento in America.”

How is the del Bosco Sacro of Benevento tradition different and similar when compared to other traditions of Stregheria?

Like other Traditions, Stregheria del Bosco Sacro of Benevento also uses, for example, magical implements, etc. These, however, take on but relatively minor importance compared to how they are used in other Stregheria Traditions. This is because essence of our Tradition are the mysteries of Love - the love of Diana Lucina - as well as the love between a man and a woman. Again, The Great Rite is of paramount importance in our Tradition.”

If the Great Rite has so much prominence in your tradition, how does that impact those who might be interested who are gay or lesbian? Is the Great Rite just for heterosexual participants?

“Due to the prominence given to The Great Rite in Stregheria del Bosco Sacro of Benevento, we have been asked about our tradition's position on sexual preference. Clearly, the Great Rite is primarily a heterosexual tradition. This does not mean, however, that our tradition excludes gay or lesbian mysteries. On the contrary, Diana and Dianus have also brought Gay and Lesbian deeper mysteries of The Great Rite with them to America as well. These, however, are separate branches of the sexual mysteries of del Bosco Sacro Tradition. We are in such a preliminary phase of our mission in America that these Gay and Lesbian mysteries have not yet been fully implemented. This will require finding suitable ambassadors for these mysteries from the GLBT community.”

Those are the answers to the questions that I fielded to Diana and Dianus. They were consulted and their answers, in Italian, were then translated and written up by Lupercus.

I feel that Diana and Dianus have answered what are likely to be the most pressing questions in a sufficiently open and transparent manner. Their tradition has a certain quality and emphasis just like any other tradition. This might be different or similar to what others practice, but that’s to be expected. Diana and Dianus have said that they don’t represent any kind of monolithic version of Stregheria. They are practicing one of many variations, and they seek to transplant that variation in the fertile soil of this country.

Whether you agree with their perspectives or not, they should be welcomed with open arms. Certainly, there is plenty of room in our country and amongst our diverse pagan and witchcraft traditions to accommodate one more. It is my hope that no one will now have any fears of any kind of turf battle, commercialized sell out of Strega or some kind of misguided attempt to wrest control over a movement that is already well established here in the U.S. I believe that Diana and Dianus are being as open and transparent as they can be, since much of what they know and teach has to be under the aegis of sworn oaths of confidentiality and secrecy.

We look forward to getting to meet Diana, Dianus, their newly forming clan, and their presentations at Pantheacon.