SELFFAMILYSOCIETYHUMANITYEARTHUNIVERSEDIVINE
Home/Popocatepetl and Iztaccihuatl: A Tragic Romance of Aztec Legend

Popocatepetl and Iztaccihuatl: A Tragic Romance of Aztec Legend 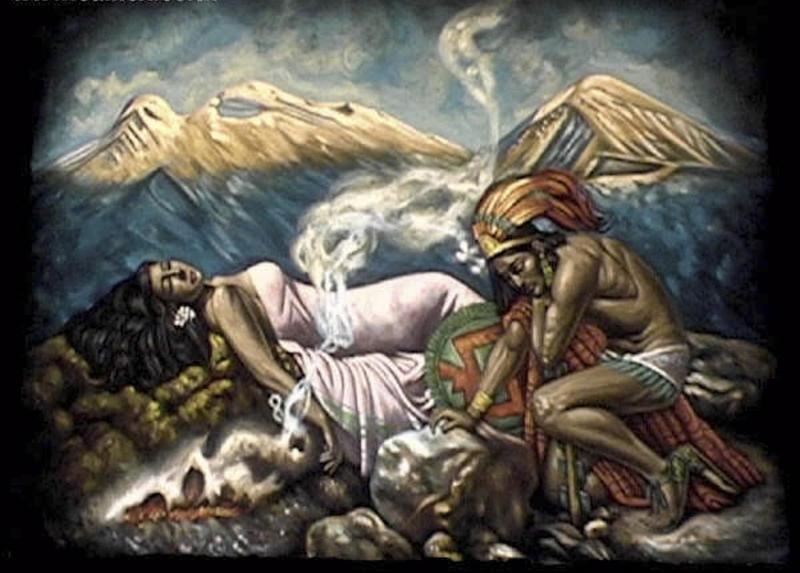 Mexican natural structures are the topic of many legends and mythical stories connected with pre-Columbian tribes like the Aztecs and Mayas. Two of the many volcanoes in Mexico became the symbols of one of the most beautiful yet tragic love stories of this land.

Volcanoes were very important for the Aztecs. In their pantheon of gods, the deity connected with them was Xiuhtecuti, also named Cuezaltzin (''flame'') or Ixcozauhqui. This was the god of day, heat, and fire, the lord of volcanoes, and the personification of life after death. It was also the lord of the light in the darkness, flood during famine, and warmth in the cold.

The deity was considered to be both the mother and father of the gods, who dwelled in the turquoise enclosure in the center of the earth. Thus, in the ancient history of Mexico volcanoes were sacred centers, signs from gods, and characters of legends.

According to Aztec mythology, two volcanoes which are located near Mexico City were once living humans – a man and woman who were deeply in love. They later transformed into the volcanoes, which are now seen as symbols of their love.

The volcanoes are located in the states of Puebla and Mexico in Central Mexico. Part of Popocatepetl is also in Morelos. They are visible from both Puebla and Mexico City. Popocatepetl is 5,426 m (17,802 ft.) tall, and it is the second highest peak in Mexico after Citlaltepetl, which rises 5,636 meters (18,491 ft.) above sea level. Iztaccihuatl is the third highest in Mexico, 5,230 m (17,160 ft.) tall. Iztaccíhuatl means ''The White woman'' and it has four individual snow-capped peaks which depict the head, chest, knees and feet of a sleeping female when seen from the east or west.

Popocatepetl means ''Smoking Mountain'', and the volcano is still active, while the last eruption of Iztaccihuatl is dated to the Holocene period. There are no resources describing the eruption of this volcano, and geological tests confirm that it has been inactive for a very long time.

The first archaeological record on these sites comes from 1889, when the researchers discovered evidence of the Aztecs who climbed the volcanoes. It is possible that they were practicing religious ceremonies. The life of the ancient tribes was very often connected with nature, so the magnificent shape of the volcanoes was obviously very attractive for worshiping their gods, but also to connect with the energy of the planet.

The Story of Popo and Itza

Popocateletl and Iztaccihuatl are known also by their short names: Popo and Izta. Their story is covered by the mists of the time, but speaks of the brave warrior Popocatepetl and a beautiful princess, Iztaccihuatl. Her father was a mighty ruler, who decided that if Popocateletl wanted to marry his daughter, he must engage in battle against the strongest enemy of the tribe and return home victorious. The young warrior loved the beautiful princess very much and he decided to accept the challenge. There are many different variations of the description of the battle, but the most popular one says that Popocateletl returned with the head of the enemy as proof of winning the battle.

While Popocatepetl was away in battle, Iztaccihuatl waited for his return. She was waiting for him for so long, that her heart became full of pain while missing him. Before Popocatepetl had reached the enemy, one of his love rivals told the princess a tragic lie. He said that Popocatepetl died during the battle. When the woman heard the news, her world collapsed. She couldn't imagine her life without her beloved, and she fell into the deepest sorrow. She didn't question the news, but believed the information - trusting that nobody could be so cruel as to lie to her about such things. As a result, she died of a broken heart.

When Popocatepetl returned to the settlement, he wanted to see his future wife, but he was informed that she died. He couldn't believe the awful news and suffered for several days and nights before he made the decision to build a great tomb under the sun. He carried his love in his arms and took her to the top of a great mountain.