Mystery of the ancient Nazca spiral holes may be solved 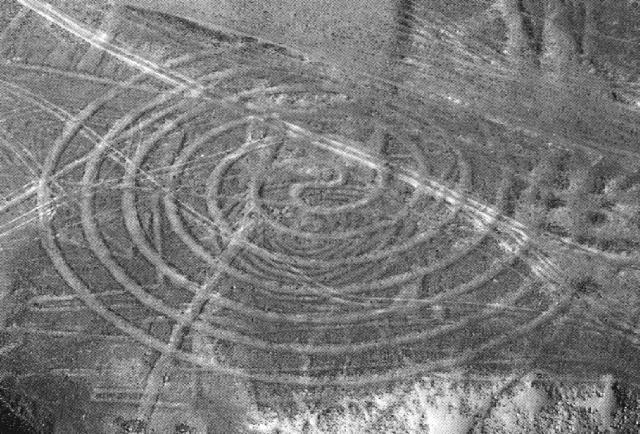 Some 2,000 years ago, in a costal region of Peru that receives less than 4 millimeters of rain annually, an ancient civilization flourished around an agriculture economy that included maize, squash, yuca, and other crops. Called the Nazca, their legacy today is best known to the world from the "Nazca Lines," ancient geoglyphs in the desert that range from simple lines to image of monkeys, fish, and lizards.

While the lines are theorized to have been created for religious purposes, the Nazcas' intricate engineering of subterranean aqueducts was the life force that supported their entire civilization. The system tapped into naturally-occurring underground reservoirs at the base of the Nazca mountains, using a series of horizontal trenches to funnel the water on its way to the sea. Dotting the surface of these underground aqueducts were dozens, perhaps even hundreds, of spiral-shaped wells known as puquios. 36 of these unique structures still exist today, with many still serving as a source of fresh water for the local population.

While the puquios have long been theorized as dual-purpose shafts for both cleaning debris from the tunnels and accessing water, their unique spiral design has remained something of a puzzle. According to Italian researchers at the Institute of Methodologies for Environmental Analysis, that mystery has now been solved thanks to an analysis of the puquios' layout from satellite imagery.

The corkscrew vertical shafts aren't just wells, they say, but a sophisticated hydraulic system that captured wind to push water through the underground aqueduct.

"Exploiting an inexhaustible water supply throughout the year the puquio system contributed to an intensive agriculture of the valleys in one of the most arid places in the world," researcher Rosa Lasaponara told the BBC. “The puquios were the most ambitious hydraulic project in the Nasca area and made water available for the whole year, not only for agriculture and irrigation but also for domestic needs.”

Thanks to their corkscrew design, the puquios would pull air into the tunnel, effectively acting as pumps and allowing the Nazcas to dictate where the water was most needed. "What is really impressive is the great efforts, organization and cooperation required for their construction and regular maintenance,” added Lasaponara.

The Nazca's command over water and subsequent abundance of crops may have led to their eventual demise. UK researchers in 2009 studying the region discovered that the Nazca cleared massive swaths of native forest for crops. Particularly devastating was the felling of the huarango tree, a critical piece of the ecosystem that helped soil retain moisture, fertility, and shored up vital irrigation channels. Once gone, the entire valley became vulnerable to massive weather events, soil-stripping winds, and flooding.

"The mistakes of prehistory offer us important lessons for our management of fragile, arid areas in the present," said co-author Oliver Whaley of the Royal Botanic Gardens in Kew, England.