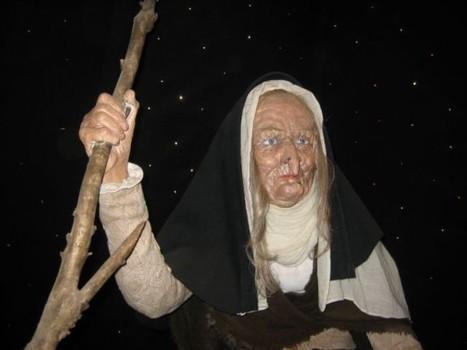 Ursula Southeil (c. 1488 - 1561), better known as Mother Shipton, was an English soothsayer and prophetess. The first publication of her prophecies, which did not appear until 1641, eighty years after her death, contained a number of mainly regional predictions. Did you speak about the end of the world? It all goes to personal interpretation.

One of the most notable editions of her prophecies was published in 1684. It states that she was born in Knaresborough, Yorkshire, in a cave now known as Mother Shipton's Cave, and was reputed to be hideously ugly. The woman who delivered Ursula', spoke of a smell of sulphur and a great crack of thunder as the child came into the world. The baby was born misshapen and huge. Some thought her father was the devil. Her mother gave her up at age two and went to live in a convent for the rest of her life.

Mother Shipton's Cave (or "Old Mother Shipton's Cave") is at Knaresborough, North Yorkshire, England, near to the River Nidd. Nearby is a petrifying well which has been a tourist attraction since 1630 due to its association with the legendary soothsayer and prophetess Mother Shipton. The cave and dropping well, together with other attractions, remain open to visitors today.

Mother Shipton exhibited prophetic and psychic abilities from an early age, writing prophecies in the form of poems, not much different than the cryptic Quatrains of Nostradamus - all subjective.

At age 24 she married Toby Shipton, a local carpenter, near York in 1512 and told fortunes and made predictions throughout her life. They had no children, but she became known as Mother Shipton because of all the people she helped. They lived in Knaresborough England. Her power to see into the future made her well known not only in her home town but throughout England.

Her legend was passed on through oral traditions and is perhaps sometimes embellished a bit. Since 1641 there have been more than 50 different editions of books about her and her prophecies. Many of her visions came true within her own lifetime and in subsequent centuries predicting important historical events well into the future including: - the Great Fire of London in 1666, the defeat of the Spanish Armada in 1588 - as well as the advent of modern technology. She even forecast her own death in 1561. Today her prophecies are still proving uncannily accurate.

It is now generally acknowledged that Mother Shipton was largely a myth, and that many of her prophecies were composed by others after her death, and after the events they predicted. Her prophecies were apparently recorded in a series of diaries but the first published book of her work did not appear until 1641 and the most noted work, by Richard Head, came out in 1684. Head later admitted to inventing almost all Shipton's biographical details.

Quite who Mother Shipton was or what exactly she said is not definitively known. What is certain is that her name became linked with many tragic events and strange goings on recorded all over the UK, Australia and North America throughout the 17/18/19th centuries.

Many fortune tellers used her effigy and statue, presumably for purposes of association marketing. Many pubs were named after her. Only two survive, one near her birthplace in Knaresborough and the other in Portsmouth where there is a life-size statue above the door.

A caricature of Mother Shipton was used in early pantomime and is believed by historians to be the forerunner of the Panto dame.