Lord Shiva and the Fisherman – Mythological story of Lord Shiva 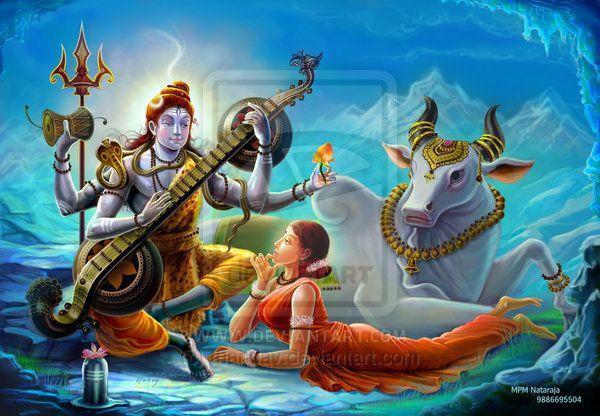 Lord Shiva lived on Mount Kailash. One day Lord Shiva started explaining the Vedas to his wife Goddess Parvati. The explanations and discussions went on for many years. One day Parvati lost her concentration. As a result, Lord Shiva lost his temper. In the fit of anger, he said, “Go to earth and take birth as a fisherwoman.”

As the words were out of his mouth, the Goddess Parvati disappeared. “Oh! What have I done?” At the same instance, Lord Shiva groaned in despair. “I can’t live without my beloved wife.”

Lord Shiva grew sad day by day. His servant Nandi, the bull, could not bear the anguish his master was going through. He thought, “My master will only be happy if his beloved came back to Mount Kailash.”

Meanwhile on the earth, Goddess Parvati took the form of a baby girl. The chief of the fishermen community saw the baby under a tree. He picked her up and took her home. Then the chief fisherman brought her up as his own daughter. He named her Parvati. Parvati would help him during fishing. Years went by and soon Parvati grew into a beautiful young girl. She used to help her father in fishing. She could row the boats faster than anyone else.

On the other side that is on Mount Kailash Lord Shiva was still yearning for his wife. Nandi Bull went to him and said, “My Lord, why don’t you call your wife back here?”

“I cannot do that, Nandi. According to her birth she is destined to marry a fisherman,” Lord Shiva said sadly.

“Oh, is that so, Then I’ll have to do something about it,” Nandi said to himself. The next day Nandi, the bull, took the form of a large whale. He went to that part of the sea where the fishermen used to come for fishing. He started troubling the fishermen. The fishermen went to complain to their chief. We cannot fish in the sea anymore. A large whale upturns our boats and tears off our nets.

Hearing the complaints of the fishermen, the Chief announced, “Whosoever will catch that whale will be allowed to marry my daughter Parvati.”

Many young fishermen tried one by one but could not catch the whale. The Chief then prayed to Lord Shiva, “O Lord, please help us to get rid of this large fish.”

Parvati also prayed, “0 Lord, please come to our help.” Lord Shiva heard Parvati’s prayers. He took the form of a young and handsome fisherman. Then he went to the chief and said, “I am here to help you. I’ll catch that whale and then marry your daughter Parvati.”

“We will always be thankful if you help us,” the chief said.

Then the marriage of the young man and Parvati was arranged. Thus Lord Shiva got back Goddess Parvati as his beloved wife once again.

by Anuj Gupta For Important India