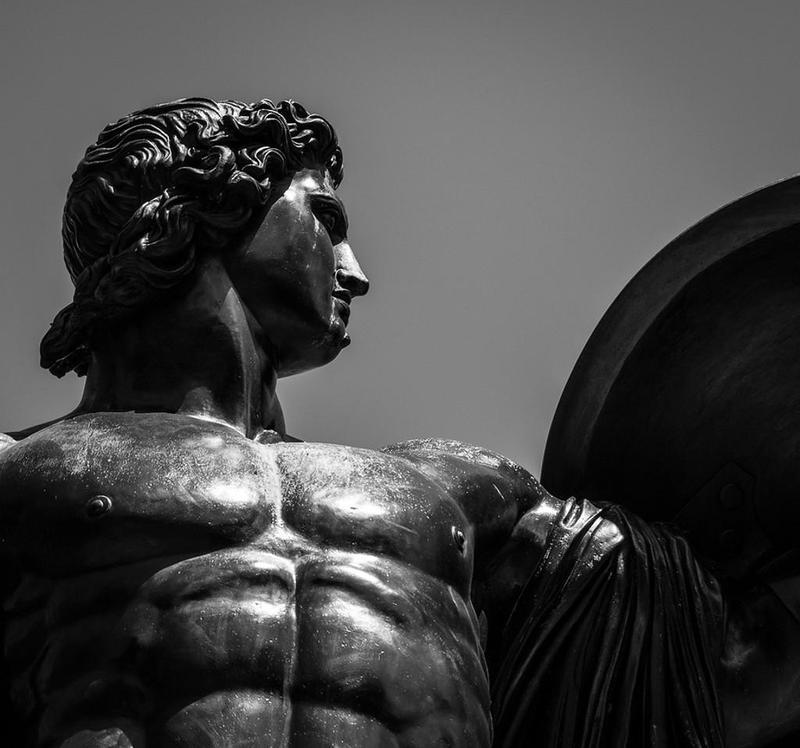 The tasks given to Heracles as penance. After he killed his children. These stories are generally referred to as the Labours of Hercules, the name the Romans used for Heracles, but since they take place in a Greek setting and with a full cast of Greek characters it seems more appropriate to retain the name Heracles. Not all writers agree on the order, or even the content, of the various tasks. Other versions include clearing the seas of pirates and the killing of Cycnus. All the Labours were carried out on the instructions of Eurystheus, king of Mycenae (or Tiryns, in some versions), who was so frightened of Heracles that he hid himself in a large bronze jar buried in the ground and had his orders passed on by his herald Copreus. For his first Labour, Heracles killed the Nemean lion which had a skin that resisted all weapons, choking it to death with his bare hands. After flaying it with its own claws, he used the skin as armour, as, in other accounts, he had done with the skin of the Cithaeronian lion. He next killed the Hydra, a monster with a body like a dog and many heads, one of which was immortal. In this he was helped by Iolaus who burned the neck as Heracles cut off each head so that the head could not grow again.

The immortal head he cut off and buried. Heracles dipped his arrows in the poison of the carcase so that the slightest wound from one of them was always fatal. In the end, this cost Heracles his own life. He was then ordered to capture the golden-horned Ceryneian hind which he did by chasing it for a year until she was exhausted, whereupon he hoisted her on to his shoulders and carried her to Mycenae. For his fourth task he captured alive the Erymanthian boar which was ravaging the area around Mount Erymanthus. En route, he killed several Centaurs and routed the others when they attacked him and Pholus, another Centaur who was entertaining Heracles. One of those who escaped was Nessus who was later to be instrumental in bringing about the death of Heracles. During this encounter, Heracles accidentally wounded Chiron, king of the Centaurs and the wise counsellor to many heroes, and Pholus died when he dropped one of Heracles' poisoned arrows on his foot. He captured the boar alive and carried it back to Mycenae. He then went off to join the Argonauts, only returning to his Labours when he was left behind at Mysia. His next task was to cleanse the stables of Augeas, king of Elis. The whole area was deep in dung from his huge herds and Heracles cleansed it all by diverting the rivers Alpheus and Peneius. He claimed one tenth of the herds as reward for his efforts but Augeas reneged on the deal.

On his way home, he saved Mnesimache from a Centaur intent upon rape, killing her attacker. The sixth Labour involved the driving off of the huge flock of maneating birds, largely made of brass, from the Stymphalian Marshes. This he did by making a terrible din with castanets (or a rattle) to scare the birds into the air where he shot them down with his poisoned arrows. The white bull given by Poseidon to Minos, which had fathered the Minotaur on his wife Pasiphae, was still ravaging Crete and for his next task Heracles successfully captured it and brought it to Mycenae. Eurystheus set it free again and it was later captured by Theseus as the Marathonian Bull and killed. Diomedes, king of the Bistones in Thrace, had four wild mares which he fed on human flesh.

Heracles was given the task of capturing these animals as his eighth Labour. On his way there he stayed with his friend King Admetus who was in mourning for his wife, Alcestis, who had sacrificed her own life to save his. Heracles, penitent for getting noisily drunk in a house of mourning, wrestled with Death himself and forced him to hand over Alcestis alive again. Having collected the mares, he drove them to the shore ready to ship them back to Greece and diverted the sea into a channel to foil the pursuing Bistones. While he was thus engaged, the mares ate Abderus who had been left in charge of them. He knocked out Diomedes and fed him to the mares which, when full, were tame enough to be led aboard his ship. He left the mares in charge of Laomedon, king of Troy. For his ninth Labour, Heracles was required to get the love-girdle given by Ares to Hippolyta, an Amazon queen, for Admete, the daughter of Eurystheus. The queen offered it to him as a gift but her people, incited by Hera to believe that Heracles intended to abduct their queen, attacked his ship. He killed Hippolyta, took her golden girdle and routed her army. Others say that he took Melanippe as hostage and returned her in exchange for the girdle while Theseus, who had joined the expedition, took Antiope who was in love with him. On the way back to Mycenae he defeated the champion boxer, Titias, at the games and inadvertently killed him and rescued Hesione who had been chained to a rock by her father, Laomedon, king of Troy, as a sacrifice to a sea-monster sent by Poseidon.

When Laomedon refused to hand over the mares of Diomedes that Heracles had left in his charge or, in some versions, reneged on a promise to give Heracles two immortal horses if he would rid Troy of the monster, Heracles killed Laomedon and all his sons except Podarces whom he set - as Priam - on the throne of Troy. He also shot and killed Sarpedon and killed both Polygonus and Telegonus in a wrestling match. His next task was to fetch the cattle of Geryon the winged, three-bodied king of Tartessus. He travelled via Libya and Helius gave him a golden bowl in which he sailed to the island of Erythea where Geryon ruled. En route to Spain, Heracles erected the Pillars of Hercules at the entrance to the Mediterranean.

In the Pyrenees, the giant Albion lay in ambush, hoping to kill Heracles to avenge the death of the other giants killed by Heracles when they attempted to overthrow the Olympian gods, but Heracles came upon him from behind and killed him. Reaching Geryon's kingdom, he killed both Orthrus, the two-headed guarddog, and Eurytion, the herdsman, with his club and Geryon with an arrow through all three bodies and then drove the cattle to Mycenae. He mated with Galata, fathering a son, Corin, to found the nation of the Gauls, and killed the brothers Ialebion and Dercynus and the three-headed Cacus, when they tried to steal the cattle. In some stories, Heracles killed Scylla for taking some of the cattle and at Croton, where he was entertained by an old hero of the same name, Lacinius tried to steal some of the cattle and a fight ensued in which Heracles accidentally killed Croton. He also killed King Faunus who had the habit of killing and sacrificing all strangers. Others he killed on this adventure were Eryx, a king of Sicily who challenged all-comers to a wrestling match and was defeated by Heracles and the giant Alcyoneus who died when the stone he threw at Heracles rebounded and killed him. Heracles' horses were stolen by a snake-woman who returned them only when Heracles agreed to sleep with her. He stayed with her for some time and fathered three sons,

Agathyrsus, Gelonus and Scythes. Some say that this snake-woman was Echidna who was Geryon's sister. The tree that Gaea had given to Hera as a wedding-gift produced golden apples and the next Labour, the eleventh, was the task of collecting some of this fruit from the garden on Mount Atlas where it was guarded by the Hesperides, daughters of Atlas, and by the dragon Ladon. He had a great struggle, through many shapechanges, with Nereus before the seagod would disclose the location of this secret garden. Heracles killed the dragon with an arrow and persuaded Atlas to get some of the apples from his daughters while he temporarily took on Atlas' task of holding up the heavens though others say that Heracles entered the garden and picked the apples himself. In some accounts, he killed Emathion who tried to prevent him from taking the apples. On the way home with the apples (which were later returned to Hera), he killed the giant King Antaeus of Lybia in another wrestling match and both Busiris, king of Egypt, and his son, Amphidamas, when the former tried to kill Heracles on a sacrificial altar to avert drought. He also found Prometheus chained to a rock, killed the vulture that had been tearing at his liver and set him free. Prometheus then took on the immortality of Chiron who was still suffering from the wound inflicted by Heracles' poisoned arrow but could not die. His final task was to bring the threeheaded dog Cerberus, the guardian of Tartarus, to Mycenae. He freed Theseus from the Seat of Forgetfulness but failed to free Peirithous.

Wrestling with Menotes, herdsman to Hades (or, in some accounts, with Hades himself), Heracles threatened to kill him unless Hades handed over Cerberus. He choked the dog into submission and dragged it to Mycenae. While he was in Tartarus, Heracles was told by the shade of Mealeager of his sister's beauty and Heracles promised to marry her. She later became his second wife, Deianeira. When Eurystheus insulted him by offering him a slave's portion of a sacrifice, Heracles killed the king's three sons, Eurybius, Erypilus and Perimedes. Cerberus was later returned to Hades.