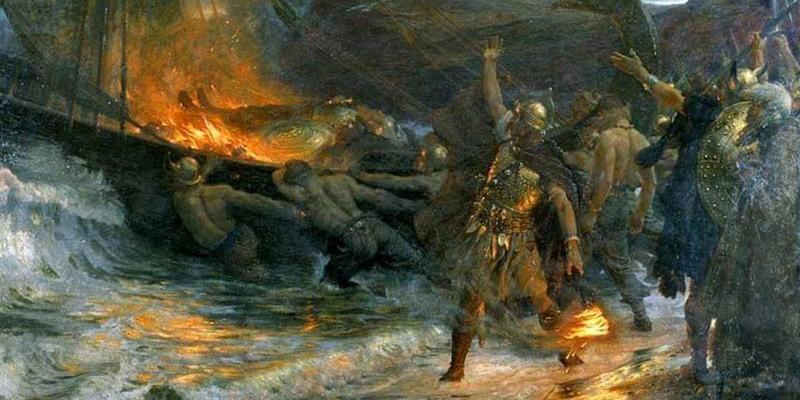 The finger ring discovered in a 9th-century Swedish grave, inscribed with Arabic Kufic writing, interpreted as reading “il-la-lah”, i.e. “For/to Allah,” sheds a new light on the ties between the Vikings and the Islamic world.

The finger ring was originally found during a late 19th-century grave excavation in the town of Birka, about 19 miles (30 kilometers) from Stockholm. on Björkö island.

In a paper published in the journal Scanning, the experts say this the only ring with an Arabic inscription found at a Scandinavian archeological site, and it is a unique object among Swedish Viking Age material.

Birka was a key trading center during the Viking age and made a UNESCO World Heritage Site in 1993.

The Islamic ring is now a part is of the Swedish History Museum’s collection, originally catalogued as being made of gilded silver and violet amethyst, bearing the inscription “Allah.”

Stockholm University biophysicist Sebastian Wärmländer and a team of researchers say they used”scanning electron microscopy (SEM) with energy dispersive X-ray spectroscopy (EDS) to analyze the ring’s composition and discovered that it was in fact made of silver alloy and the “amethyst” was colored glass.

“For the stone, we must remember that even though colored glass might today be perceived as a ‘fake’ material of lower value, this was not necessarily so in the past,” the team cautioned.

“Even though glass production began around 5,000 years ago in the Levant it was still an exotic material in Viking Age Scandinavia.”

More importantly, the team of researchers found no trace of the gold that had been assumed to coat the ring and noted the presence of filing marks.

“Together with the absence of gold on the metal surface … the file marks clearly show that the previous description of the ring as gilded was mistaken: if the surface had been gilt and the gold layer had worn away, also the file markings would be gone. But the metal surface displays no wear, and as the original file marks are still in place, this ring has never been much used.”

Therefore, the team believes that the ring was passed from an Arabic silversmith to the woman. The ring may therefore, constitute material evidence for direct interactions between Viking Age Scandinavia and the Islamic world.

“It is not impossible that the woman herself, or someone close to her, might have visited — or even originate from — the Caliphate (which then stretched from Tunisia to the borders of India) or its surrounding regions,” they said.

“The importance of the studied Birka ring is that it most eloquently corroborates ancient tales about direct contacts between Viking Age Scandinavia and the Islamic world. Such contacts must have facilitated exchange of goods, culture, ideas, and news much more efficiently than indirect trade involving several merchants in-between,” they concluded.