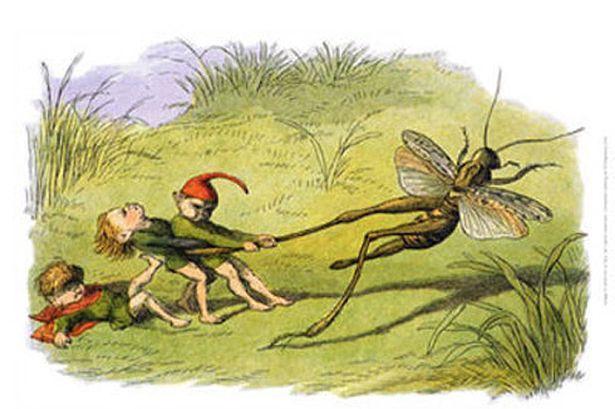 In Icelandic folklore, the Huldufólk (meaning hidden people ) are like elves. These beings are also said to be very similar to human beings, and live in little houses in the rocks. Although the Huldufólk are usually hidden from the view of people, some humans are believed to be privileged enough to see them. There are many stories of encounters with the Huldufólk.

There are (at least) two stories which provide an explanation for the existence of the Huldufólk. Both of these stories have a Christian aspect. In the first story, the origin of the Huldufólk is traced back to a period of time before the fall of man. The story is set in the Garden of Eden, where God comes to visit Adam and Eve one day and requests to meet their children.

At that time, Eve was bathing them, though she had not finished doing so. Embarrassed to show God the dirty ones, she hid them, and only showed him those who were clean. God then asked Eve if there are any more of her children whom he had not met yet, to which Eve answered ‘no’. God, however, being omniscient, knew what was going on, and declared that those who had been hidden from him would also be hidden from man. As a result, the ‘dirty children’ became the first Huldufólk.

The second story is about a traveler who gets lost and stumbles upon a farm one night. He knocks on the door, and is greeted by an elderly woman, who invites him in. The woman provides him with supper, and introduces the traveler to her daughters.

The traveler is then given a bed for the night, and he asks if one of the woman’s daughters could keep him company, a request which his hostess agrees to. In bed, the traveler tries to embrace the young lady, but his hands pass through her.

The traveler inquired about what was going on and was told the story of the Huldufólk. In this tale, the Huldufólk came into being following the revolt of Lucifer in Heaven, as they were those who neither supported nor opposed the Devil and his fallen angels. As a result of their neutrality, the Huldufólk were driven down to earth and forced to live in the rocks and hills.

For many in Iceland, the Huldufólk are not merely fictional characters in the country’s colorful mythology. There seems to be a profound belief in the existence of these supernatural beings. There are those who claim that they have the ability to see and communicate with the Huldufólk.

Furthermore, tours that bring visitors to sites where the Huldufólk are alleged to inhabit / to have been sighted are also in operation on the island. This is perhaps especially so in Hafnarfjörður, which is considered to be the ‘elf capital’ of Iceland.

Destruction of the Huldufólk habitat

Apart from that, it is also believed that the alteration of the landscape by human beings could potentially have a negative effect on the lives of the Huldufólk, and that construction projects should be halted if they would disturb them.

One example is a highway to link the Alftanes peninsula to Gardabaer, a suburb in Reykjavik. According to those opposing the project, the highway would cut through a Huldufólk habitat. More seriously was the inevitable destruction of an important ‘elf church’, a jagged rock about 3.7 m (12.13 ft.) in height, if the project were to continue.

In the end, the issue was resolved by a seer who claimed that she could communicate with the Huldufólk. The seer mediated between the Huldufólk and the highway-builders, and a solution was reached.

It seems that the Huldufólk agreed to allow the project to continue, so long as the ‘elf church’ was carefully relocated to a new site. This is one instance where a peaceful solution was said to have been reached between human beings and the Huldufólk. Nevertheless, there are also stories in which the Huldufólk are believed to have retaliated against the destruction of their homes by causing bad things to happen, such as the breakdown of new machinery and accidents at the worksite.