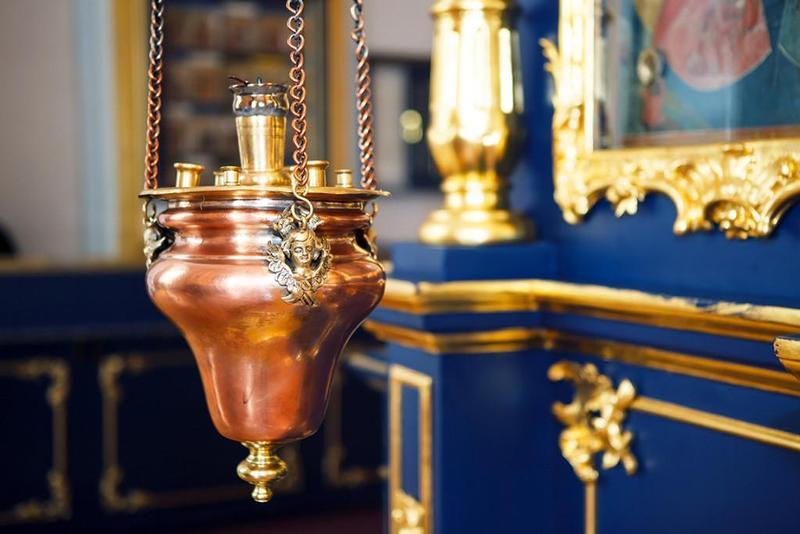 The Russian Orthodox Church is more than one thousand years old. According to tradition, St. Andrew the First Called, while preaching the gospel, stopped at the Kievan hills to bless the future city of Kiev. The fact that Russia had among her neighbors a powerful Christian state, the Byzantine Empire, very much contributed to the spread of Christianity in it. The south of Russia was blessed with the work of Sts Cyril and Methodius Equal to the Apostles, the Illuminators of the Slavs. In 954 Princess Olga of Kiev was baptized. All this paved the way for the greatest events in the history of the Russian people, namely, the baptism of Prince Vladimir In the pre-Tartar period of its history The Russian Church was one of the metropolitanates of the Patriarchate of Constantinople. The metropolitan at the head of the Church was appointed by the Patriarchate of Constantinople from among the Greeks, but in 1051 Russian-born Metropolitan Illarion, one of the most educated men of his time, was installed to the primatial see.

Majestic churches began to be built in the 10th century. Monasteries began to develop in the 11th century. St. Anthony of the Caves brought the traditions of Athonian monasticism to Russia in 1051. He founded the famous Monastery of the Caves in Kiev which was to become the center of religious life in Old Russia. Monasteries played a tremendous role in Russia. The greatest service they did to the Russian people, apart from their purely spiritual work, was that they were major centers of education. In particular, monasteries recorded in their chronicles all the major historical events in the life of the Russian people. Flourishing in monasteries were icon-painting and literary art. They were also those who translated into Russian various theological, historical and literary works.

In the 12th century, the period of feudal divisions, the Russian Church remained the only bearer of the idea of unity of the Russian people, resisting the centrifugal aspirations and feudal strife among Russian princes. Even the Tartar invasion, this greatest ever misfortune that struck Russia in the 13th century, failed to break the Russian Church. The Church managed to survive as a real force and was the comforter of the people in their plight. It made a great spiritual, material and moral contribution to the restoration of the political unity of Russia as a guarantee of its future victory over the invaders.

Divided Russian principalities began to unite around Moscow in the 14th century. The Russian Orthodox Church continued to play an important role in the revival of unified Russia. Outstanding Russian bishops acted as spiritual guides and assistants to the Princes of Moscow. St. Metropolitan Alexis (1354-1378) educated Prince Dimitry Donskoy. He, just as St. Metropolitan Jonas (1448-1471) later, by the power of his authority helped the Prince of Moscow to put an end to the feudal discords and preserve the unity of the state. St. Sergius of Radonezh, a great ascetic of the Russian Church, gave his blessing to Prince Dimitry Donskoy to fight the Kulikovo Battle which made the beginning of the liberation of Russia from the invaders.

Monasteries made a great contribution to the preservation of the Russian national self-consciousness and identity during the Tatar yoke and in the times of Western influences. The 13th century saw the foundation of the Pochayev Laura. This monastery and its holy abbot Ioann (Zhelezo) did much to assert Orthodoxy in western Russian lands. Some 180 new monasteries were founded in the period from the 14th to the mid-15th century in Russia. Among major events in the history of old Russian monasticism was the foundation of the Trinity Monastery by St. Sergius of Radonezh (c. 1334). It is in this glorious monastery that St. Andrew Rublev developed his marvelous talent at icon-painting.

Liberating itself from the invaders, the Russian state gathered strength and so did the Russian Orthodox Church. In 1448, not long before the Byzantine Empire collapsed, the Russian Church became independent from the Patriarchate of Constantinople. Metropolitan Jonas, installed by the Council of Russian bishops in 1448, was given the title of Metropolitan of Moscow and All Russia.

The beginning of the 17th century proved to be a hard time for Russia. The Poles and Swedes invaded Russia from the west. At this time of trouble the Russian Church fulfilled its patriotic duty before the people with honor, as it did before. Patriarch Germogen (1606-1612), an ardent patriot of Russia who was to be tortured to death by the invaders, was the spiritual leaders of the mass levy led by Minin and Pozharsky. The heroic defense of St. Sergius' Monastery of the Trinity from the Swedes and Poles between 1608-1610 has been inscribed for ever in the chronicle of the Russian state and the Russian Church.

In the period after the invaders were driven away from Russia, the Russian Church was engaged in one of the most important of its internal tasks, namely, introducing corrections into its service books and rites. A great contribution to this was made by Patriarch Nikon, a bright personality and outstanding church reformer. Some clergymen and lay people did not understand and did not accept the liturgical reforms introduced by Patriarch Nikon and refused to obey the church authority. This was how the Old Believers' schism emerged.

The beginning of the 18th century in Russia was marked by radical reforms carried out by Peter I. The reforms did not leave the Russian Church untouched as after the death of Patriarch Adrian in 1700 Peter I delayed the election of the new Primate of the Church and established in 1721 a collective supreme administration in the Church known as the Holy and Governing Synod. The Synod remained the supreme church body in the Russian Church for almost two centuries.

In the Synodal period of its history from 1721 to 1917, the Russian Church paid a special attention to the development of religious education and mission in provinces. Old churches were restored and new churches were built. The beginning of the 19th century was marked by the work of brilliant theologians. Russian theologians also did much to develop such sciences as history, linguistics and Oriental studies.

The 20th century produced the great models of Russian sanctity, such as St. Seraphim of Sarov and the Starets of the Optina and Glinsky Hermitages.

Early in the 20th century the Russian Church began preparations for convening an All-Russian Council. But it was to be convened only after the 1917 Revolution. Among its major actions was the restoration of the patriarchal office in the Russian Church. The Council elected Metropolitan Tikhon of Moscow Patriarch of Moscow and All Russia (1917-1925).

St. Tikhon of Moscow exerted every effort to calm the destructive passions kindled up by the revolution. The Message of the Holy Council issued on 11 November 1917 says in particular, "Instead of a new social order promised by the false teachers we see a bloody strife among the builders, instead of peace and brotherhood among the peoples - a confusion of languages and a bitter hatred among brothers. People who have forgotten God are attacking one another like hungry wolves... Abandon the senseless and godless dream of the false teachers who call to realize universal brotherhood through universal strife! Come back to the way of Christ!"

For Bolsheviks who came to power in 1917 the Russian Orthodox Church was an ideological enemy a priori, as being an institutional part of tsarist Russia it resolutely defended the old regime also after the October revolution. This is why so many bishops, thousands of clergymen, monks and nuns as well as lay people were subjected to repression up to execution and murder striking in its brutality.

When in 1921-1922 the Soviet government demanded that church valuables be given in aid to the population starving because of the failure of crops in 1921, a fateful conflict erupted between the Church and the new authorities who decided to use this situation to demolish the Church to the end. By the beginning of World War II the church structure was almost completely destroyed throughout the country. There were only a few bishops who remained free and who could perform their duties. Some bishops managed to survive in remote parts or under the disguise of priests. Only a few hundred churches were opened for services throughout the Soviet Union. Most of the clergy were either imprisoned in concentration camps where many of them perished or hid in catacombs, while thousands of priests changed occupation.

The catastrophic course of combat in the beginning of World War II forced Stalin to mobilize all the national resources for defense, including the Russian Orthodox Church as the people's moral force. Without delay churches were opened for services, and clergy including bishops were released from prisons. The Russian Church did not limit itself to giving spiritual and moral support to the motherland in danger. It also rendered material aid by providing funds for all kinds of things up to army uniform. Its greatest contribution, however, was expressed in financing the St. Dimitry Donskoy Tank Column and the St. Alexander Nevsky Squadron.

This process, which can be described as a rapprochement between Church and state in a "patriotic union", culminated in Stalin's receiving on September 4, 1943 Patriarchal Locum Tenens Metropolitan Sergiy Stragorodsky and Metropolitan Alexy Simansky and Nikolay Yarushevich.

Since that historic moment a "thaw" began in relations between church and state. The Church, however, remained always under state control and any attempts to spread its work outside its walls were met with a strong rebuff including administrative sanctions.

The Russian Orthodox Church was in a hard situation during the so called 'Khrushchev's thaw" as well when thousands of churches throughout the Soviet Union were closed "for ideological reasons".

The celebrations devoted to the Millennium of the Baptism of Russia, which acquired a national importance, gave a fresh impetus to church-state relations and compelled the powers that be to begin a dialogue with the Church, building these relations on the basis of recognition of the great historical role it had played in the fortunes of the Motherland and its contribution to the formation of the nation's moral traditions.