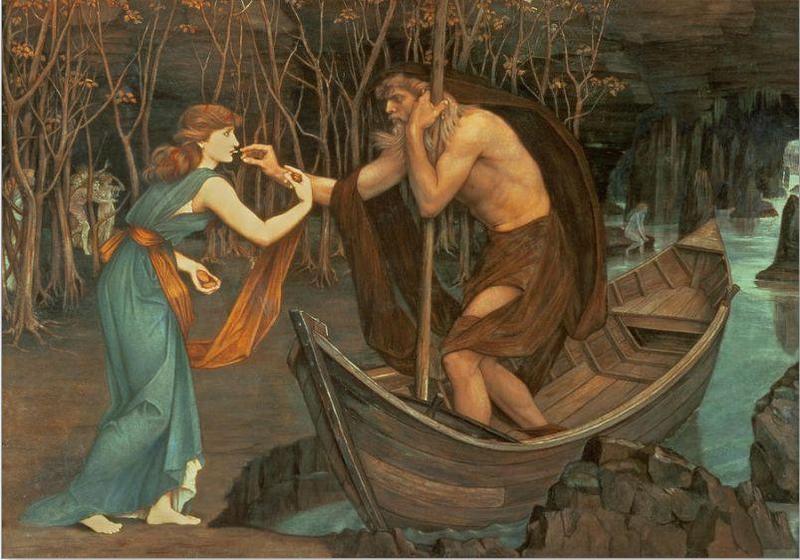 Charon’s obols were coins supposedly used by the ancient Greeks for funerary purposes. More precisely, the belief is that these coins were used by the shades (roughly equivalent to the concept of ‘spirit’ or ‘ghost’) of the dead to pay for their journey across the River Styx or Acheron into the Underworld. In Greek mythology, the ferryman of the dead is a figure called Charon, who was the son of Nyx and Erebos. Thus, according to literary sources, if a dead person was to be buried, a coin would be placed in his / her mouth prior to the burial. Nevertheless, the archaeological evidence seems to paint a different picture compared to the written sources.

The Ferryman of Hades

In Greek mythology, the realm of the living is separated from the Underworld by the River Styx and Acheron. In order for the shades of the dead to enter into the Underworld, they were required to cross either one of these rivers. It seems that the only way of doing so was to get onto the boat that was operated by Charon, the ferryman of Hades.

The concept of Charon as a ferryman was a later addition to Greek mythology, as this character does not appear in any works of the early Greek poets. For example, in Hesiod’s Theogony, which is about the birth of the gods, there is no mention whatsoever of Charon.

Nevertheless, the idea that there was a ferryman plying the waters of the Styx and / or Acheron seems to have caught on. Numerous references to this figure can be found in later literary works, including those of Aeschylus, Aristophanes, Ovid, and Virgil.

Obols or the Earthly Plane

Charon has also been portrayed in Greek vase paintings. In this medium, he is commonly depicted as “an ugly, bearded man with a crooked nose, wearing a conical hat and tunic”. In addition, he is often shown standing in his boat holding an oar, and waiting to receive the shades of the newly dead.

Charon does not ferry his passengers for free, and they are, according to Greek belief, required to pay him an obol for his service. In order to have this amount of money in the afterlife, the dead needed to be buried with this coin in their mouths. Some sources mention that if a shade was not able to pay the ferryman, he / she would need to wander on the earthly side of the river for a hundred years before being allowed to cross it.

The Greek word ‘obol’ originally meant ‘roasting spit’, as bundles of iron roasting spits once served as a type of currency before coins were minted. When coins came into use, the obol was the name given to the small silver coins that were valued at one sixth of a drachma. Later on, i.e. after the conquest of Greece by the Romans, the obol was used to describe any low value bronze coin.

Literary and Archaeological Evidence for Obols

Whilst the literary sources mention specifically that the obol was placed in the mouth of the deceased, archaeological evidence seems to tell a different story. Only a small proportion of burials found in ancient Greek cemeteries contain any coins at all. In other words, this practice seems to have not been as wide-spread as the literary sources suggest. In many of these burials, it has been found the dead were buried with more than a single coin. Additionally, these coins were not always of low value, and were placed on various parts of the body, not just in the mouth.

This suggests that the literary sources only recorded one of the funerary customs practiced by the ancient Greeks. Apart from the placement of obols in the mouths of the dead, it is likely that there were other practices as well, though these were not given much attention, if at all. On top of that, it is also possible that the reasons for placing coins with the dead had other purposes that paying for a boat ride across the River Styx or Acheron.