This year’s International Film Festival Rotterdam had a rich selection of filmic fare, as world famous directors like Guillermo del Toro appeared alongside lesser-known filmmakers. However, the most fascinating aspect of the festival was not actually a movie.

During the first week of the festival, the Thai director Apichatpong Weerasethakul, opened a hotel, Sleepcinemahotel. This one-off project proved to be a fully functioning hotel, having an open-space dormitory that had beds, showers and hammocks. For $75 you got a place to lay your head, with breakfast included. Nothing out of the ordinary you may think.

However, 24 hours each day, hypnagogic images – the type of thing you see in your mind while you drift off to sleep were projected on the resort’s walls. There were no loops, so the same picture was never projected twice during the five days the hotel was open. Images were of sleeping animals, sleeping people, water and clouds. When asked why he’d picked this selection of pictures, Weerasethakul stated:

The sea is a place that inspires you to think, to align various thoughts. The horizon is the border between day and night. It evokes contradictions, such as death and life, consciousness and dreams.

In a meeting with Film Comment magazine Weerasethakul said he desired the guests of the resort to make new images in their minds, as those projected to the hotel walls infiltrated and affected their unconscious.

In the morning the guests were invited to compose these dream pictures down in the” Dream Book”.

This film-dream experimentation calls into question the goal of cinema and its role as a medium constructed on a transparent narrative. Dreams and the unconsciousness are crucial parts of the director’s productions. He’s deeply embedded in the art house and film festival circuit – and the Rotterdam film festival has had a significant effect on his career. He received financial aid from the Hubert Bals Fund in 1998, and since that time, his movies have been screened or have been in contest there. 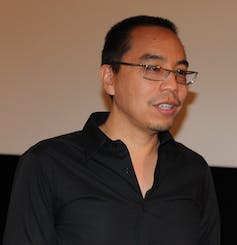 Weerasethakul is also famous for his art installations and short movies. Back in April 2016 he presented an all-night screening at the Tate Modern in London, comprising four feature films and 28 shorts. During a preceding Q&A, Weerasethakul actively encouraged audience members to sleep during the screening in the expectation that the images would impact their dreams. With the introduction of the hotel in Rotterdam, Weerasethakul’s project, which intends to blur the boundaries between film viewing and dreaming, reached its apex.

Weerasethakul’s movies have always had an ethereal, dreamlike quality. His loosely assembled narratives allow for moments of quietude and reflection. Therefore, his job is connected with the “ slow cinema” aesthetic. The hallmarks of this specific style are the use of extremely long takes, static pictures, moments of quietness and contemplation, together with an absence of action-packed storyline – rather favouring the visualisation of the regular life of his characters.

But is it art?

Certainly, this is sometimes regarded as the polar opposite of much of the mainstream market. This aesthetic has received much criticism, most famously by Nick James in his editorial for the April 2010 edition of Sight & Sound.

Yet, to some degree, it’s also been found in mainstream fare. Among the most celebrated sequences in cinema is the extreme long shot of Omar Sharif as he rides on a camel over the crests of otherworldly sand dunes in Lawrence of Arabia. This pertains to a number of the hallmarks of slow cinema, however a story remains present after this sequence.

If theatre is regarded as an art form in addition to a commercial medium, audience expectations will dictate the delight derived from films from specific market sectors. Weerasethakul’s movies can be thought of as a hybrid form, situated between theatre, art and dreams – outside of the mainstream. So new thinking is needed to assess its value.

An art gallery permits people to meander through different artworks: paintings, sculptures and moving images. Some works may construct a story of sorts, drawing connections with the artwork around them – whether that be based on the creators. Others are individual pieces that need time to absorb their beauty. Some create a feeling of urgency and pace, others a feeling of calm.

If all these varied styles, feelings and topics can be set under a single roof, why can not they be viewed on screen at precisely the same moment? Why not allow for images within a movie that are there for aesthetic attractiveness instead of narrative fulfilment? Sleepcinemahotel is Weerasethakul’s most direct culmination of cinema and art: the moving picture, with the static.

Given that many people have a camera phone, there’s a concern that the currency of the still image is becoming debased. However, the moving image is alive and well. Weerasethakul shows us the way to present the two forms in the identical filmic text, enabling us to love the moving image in addition to the still frame, not only as narrative amusement – as art forms.

Our body has a natural day and night cycle that often needs some rebalancing. When this rhythm returns to a natural state we can begin to explore how to improve sleep quality.

Are you experiencing recurring dreams? Did you have a dream that you have found you can’t stop thinking about?

I can help you to understand your dreams and why you are having them. Through interpreting your dreams, I can gu…

Did you know that some towns actually shut down in the afternoon so that everyone can go or a quick power nap, recharge and come back to work? Unfortunately, this isn’t the case in the US where a mid-day nap is quite the luxury rarely who can afford and i…

Hector Arnold
3 min.
Dream Interpretation
Mar 2 2021
You can remember your dreams with these Plants

People who have lucid dreams know they are dreaming and they have the ability to control their dreams.

The first time I took psychedelic mushrooms it was an accident.

I was in college, at a friend’s party. A European hippy buddy had brought a big bag and left them out. I ate a handful, thinking it was some weird Euro trail mix or something. My sentence co…

Hector Arnold
1 min.
Dream Interpretation
Mar 29 2018
Here is Why You Should Always Shower Before Bed

Whether you’re feeling stressed or just need something to wake you up, sometimes there’s nothing better then having a shower. Studies have already shown that showering in the morning can boost your energy and make you feel more awake, with one study even …

Did you know that some towns actually shut down in the afternoon so that everyone can go or a quick power nap, recharge and come back to work? Unfortunately, this isn’t the case in the US where a mid-day nap is quite the luxury rarely who can afford and i…

Hector Arnold
3 min.
Dream Interpretation
Mar 2 2021
You can remember your dreams with these Plants

People who have lucid dreams know they are dreaming and they have the ability to control their dreams.