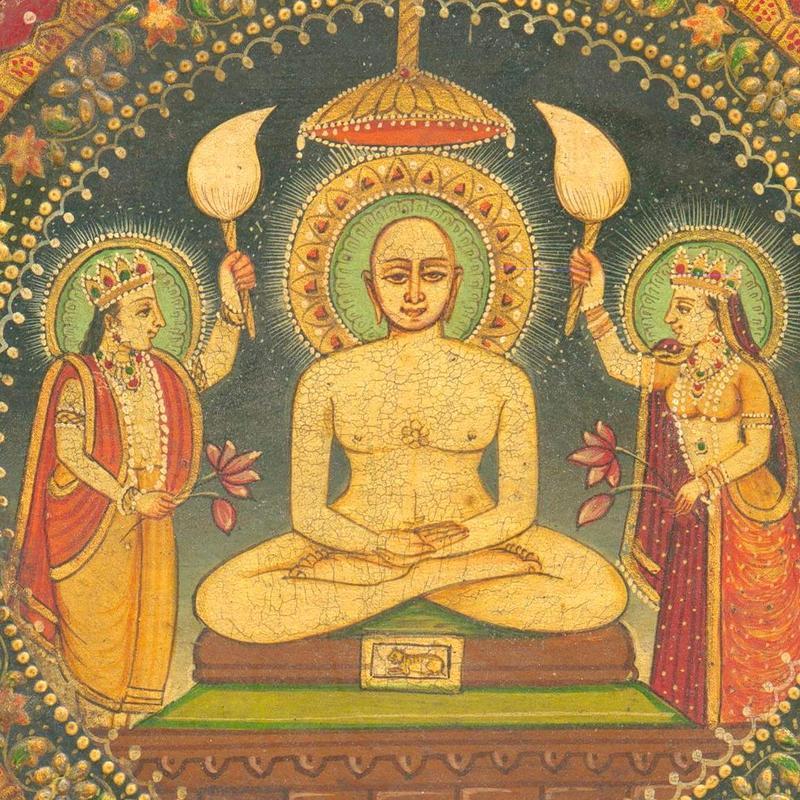 Jainism is considered one of the most ancient religious traditions of India. There was a time when Jainism was popular both in north and south India and patronized by many great kings of great repute, including Chandragupta Maurya. It is probably the most significant ancient ascetic tradition of the subcontinent, with its heavy emphasis upon self-denial, renunciation and austerities.

Jainism derives its name from jina, meaning conqueror, victorious, or old and wise. A jina is a conqueror of his mind and body and liberated from the cycle of births and deaths. He does this by conquering his desires and attachments to all things material and by annihilating his accumulated karma through severe austerities and practice of steadfast virtue. Jainism suggests an austere path by which individual beings caught in the cycle of births and deaths can achieve liberation and become jina; and that path is not easy to follow.

There are two popular misconceptions regarding Jainism. The first one is that Jainism is a kind of Buddhism and the second is that Mahavira was its founder. Contrary to the popular notion, Vardhamana Mahavira was not its founder. There are clear indications that the tradition existed centuries before his birth. Indeed Mahavira was the last of the 24 Thirthankaras. Secondly, Jainism and Buddhism have very little in common. There are some obvious similarities between the two, such as belief in rebirth and karma, but they also differ widely. Historically, Jainism is much older than Buddhism. It is also a theistic and ascetic religion with its belief in individual souls whereas Buddhism is a monastic religions, which does not believe in the idea of an eternal Self or eternal beings.

Mahavira, can be described as the foremost reformers of Jainism. He popularized many concepts of Jainism such non-violence. As the last Thirthankara, he played a vital role in popularizing Jainism in the urban areas of ancient India and ensured its continuity and popularity. Through his teachings and personal example he strengthened its foundation and reaffirmed its core especially at a time when the tradition faced numerous challenges from opposing traditions.

Because of his efforts and personal appeal, Jainism took firm roots in the Indian subcontinent and became the third most important religion. Although it suffered a major decline afterwards, it maintained its stronghold in certain sections of Indian society. Today, Jainism, which is a difficult religion to practice, enjoys over four million committed followers in India and probably a million followers elsewhere, including USA and UK.

Rishabha, is believed to be the founder of Jainism. He was the first of the Thirthankara. According to Jain texts, he was the father of king Bharata, the first emperor of the Indian subcontinent after whom India was originally named. Since he was the first Thirthankara, Rishabha must have lived several generations before Mahavira, around 1500 BC or so.

Some Indologists believe that the Indus valley people probably practiced some ancient form of Jainism and that the Indus seal depicting a seated yogi was probably the representation of a Jain Thirthankara rather than Lord Siva. In Jainism, many inventions are attributed to Rishabha, including the starting of agriculture and organized farming.

Parsvanatha, the 23rd Thirthankara, preceded Mahavira and gave his followers a definite identity as a distinct sect of dedicated ascetics. Before he renounced his princely life and became a monk, Vardhamana seems to have derived inspiration from this sect. According to some historians Parsvanath was the real founder of Jainism. From the Kalpasutra of Bbadrabahu, who lived during the period of Chandragupta Maurya, we understand that Parsvanath was a Kshatriya, who married Prabhavathi, daughter of king Naravarman and turned to asceticism after living the life of a householder for 30 years. He made Jainism popular among masses and enjoyed considerable following. Among his followers were said to be 16000 sramanas or mendicants, 38,000 nuns, 164,000 men and 327,000 women as lay disciples. He lived for a hundred years before his passing away on the mount Sammeta. He probably lived some 200 years before Mahavira. about 8th century BC or so.

Parsvanath urged his followers to observe four vows, namely not to injure life, not to lie, not to steal and not to own property. To these four vows, Mahavira added the fifth, namely to observe chastity. In his life time, Mahavira enjoyed the support of only a section of the Jains. The rest continued to have their primary allegiance to the teachings of Parsvanath. Mahavira's parents themselves were said to be followers of Parsvanath. After Mahavira attained liberation and established his Order, most of the followers of Parsvanatha joined him. However we have reasons to believe that this group kept its separate identity and was responsible for the subsequent schism resulting in the formation of Svetamabaras (white robed ascetics) and Digambaras (naked ascetics), the former adhering to the teachings of Parsvanath and the latter of Mahavira.

Historically, there is little doubt that Jainism existed much before Mahavira. The Yajurveda mentions the names of three Thirthankaras, namely Rishabha, Ajithanatha, and Aristanemi. The Bhagavatha Purana acknowledges Rishabhadeva as the founder of Jainism. The Buddhist texts refer to Mahavira as Niggantha Nathaputta. According to the Jain legends, Rishabhanatha was the father of Bharata, the first emperor of India, after whom the subcontinent of India was named. A great churning of religious ideas and doctrines took place in the post epic India and the most popular way these differences could be resolved or confronted was not through wars or intolerance but through debate and discussion. As a part of this tradition the followers of Jainism held discussions with various religious groups.

Mahavira was born in a princely family which belonged to the Jnatrika clan. His original name was Vardhamana and his father's name was Siddhartha. Siddhartha was married to Trishala, daughter of king Chetaka whose other daughters were married into some prominent royal households of his time including that of king Bimbisara.

There is no unanimity among historians about Mahavira's year of birth. According to Jain texts, he married Yashoda and had a daughter through her. After his parents died, he took permission of his brother and became an ascetic. He wandered for twelve long years from place to place, performing severe austerities and subjecting himself to rigorous discipline, before he received enlightenment and became an Arhat, under a Sal tree, in the vicinity of an old temple at a place called Jrimbhika grama. His personal charm and teachings attracted considerable following from all sections of society, especially in the urban areas where people were expecting more convincing solutions to the philosophical issues concerning death, aging and disease. It is believed that before his enlightenment Mahavira spent some time in the company of Gosala, the founder of Ajivkia sect, and the Buddha, the founder of Buddhism, before parting ways from both of them on account of doctrinal differences regarding some important beliefs about fate and free will. According to the most popular opinion based on historical accounts, he probably died in 468 BC.

Jainism did not arise as some kind of a reaction of the princely classes against the Brahmanical society or as a revolt against Brahmanism. It existed for long on the Indian soil as a distinct sect, with a set of beliefs and philosophy of its own. We cannot say that the relationship between the followers of Hinduism and Jainism was all that cordial. Jainism's unequivocal emphasis on the non-existence of God made any possibility of reconciliation between the two remote. Although a difficult religion to follow, with its emphasis on karma and non-belief in the existence of God, Jainism enjoyed a distinct following of its own in various parts of Indian subcontinent, posing a stiff challenge to both Hinduism and Buddhism for long. Chandragupta Maurya was a convert to Jainism in the last part of his life. So were many kings and emperors in ancient India. In a way it played a crucial role in the transformation of King Asoka, who with an aim to expand his empire declared war against the mighty Kharavelas of Orissa, who were ardent followers of Jainism. The ensuing war between the two armies resulted in great bloodshed and loss of life on both sides, prompting victorious Asoka in the end to replace his policy of violent conquest with a new policy of peaceful conquest by spreading his Dhamma or law of piety.

Some how unlike Buddhism, Jainism never drew itself into some kind of confrontation with Hinduism or Brahmanism, though both religions differed fundamentally on almost every issue, from God to the concept of matter and karma.

It also did not undergo any radical change over time, nor its followers ever compromised with Hinduism or any other religion, the way some sects of Buddhism suffered in the post Gupta period. The followers of Hinduism on their part remained somewhat indifferent to Jainism, as it did not seriously challenge their base nor posed a threat to their social order. They acknowledged the Buddha as a reincarnation of Lord Vishnu, but largely ignored Vardhamana Mahavira except by way of some reference to him in the Puranas as a preacher of deluded doctrines. Besides, being a strict religion that admitted no divergence between theory and practice, with its emphasis on self mortification as the common method of liberation, Jainism offered no instant solace to the masses, unless they were willing to commit themselves fully to the path and observe the principal vows strictly, which was not an easy task even for the strong willed. For the orthodox elements of the Vedic world, Jainism was a diversion or distraction created by God purposefully to mislead the sinners and the deluded into a false dogma that failed to acknowledge God as the cause of all creation.