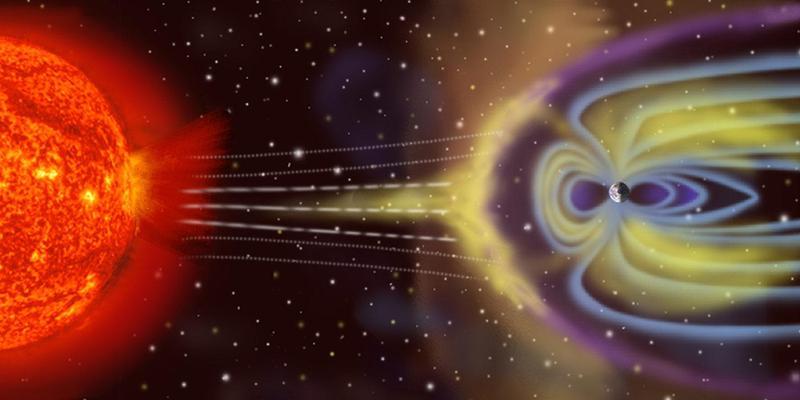 More than 2,500 years ago in the ancient Near East, the Earth's geomagnetic field was going gangbusters. During the late eighth century B.C., a new study finds, the magnetic field that surrounds the planet was temporarily 2.5 times stronger than it is today.

Researchers know about these fluctuations thanks to the bureaucracy of Judah, an ancient kingdom situated around what is now Jerusalem. Pottery jugs from between the eighth and second centuries B.C. bear administrative stamps that changed with the political situation. Unbeknown to the people firing these jugs, the act of heating locked information about the Earth's geomagnetic field into minerals present in the clay. Because the stamps provide precise information about when the pots were fired, the study allows a detailed look at geomagnetic changes over 600 years.

"This was the system of the king in Jerusalem to be able to collect tax efficiently," study author Erez Ben-Yosef, an archaeologist at Tel Aviv University, said of the stamps. "We are actually benefiting from a good bureaucratic system, the ancient IRS."

The Earth is surrounded by a magnetic field that arises from the motion of iron in the liquid outer core. Direct observation of the field has been possible for only about 180 years, Ben-Yosef told Live Science. In that time, the field has weakened by about 10 percent, he said. Some researchers think the field might be in the process of flipping, so that magnetic north becomes magnetic south and vice versa.

The new study reveals much faster changes in intensity. There was a spike in intensity during the late eighth century B.C., culminating in a rapid decline after about 732 B.C., Ben-Yosef and his colleagues reported today (Feb. 13) in the journal Proceedings of the National Academy of the Sciences. In a mere 31 years beginning in the year 732 B.C., there was a 27 percent decrease in the strength of the magnetic field, the researchers found. From the sixth century B.C. to the second century B.C., the field was generally stable, with a slight gradual decline.

"Our research shows that the field is very fluctuating," Ben-Yosef said. "It fluctuates quite rapidly, so there is nothing to worry about," as far as the current decline, he said. (This doesn't mean that the magnetic field isn't going to flip in the near future; the new study looked at only strength of the field, not directionality. The findings do suggest that there's no reason to worry that a 10 percent decline in the field strength over more than a century is abnormal, Ben-Yosef said.)

At least in the Levant, that is. All of the pottery in the study came from this region, which encompasses what is now Syria, Jordan, Israel, Palestine, Lebanon and nearby areas. That means researchers can't be sure whether the same fluctuations were happening elsewhere. Because the scientists also don't know for sure the precise locations within the Levant where the pottery was fired, they can't say anything about the direction of the geomagnetic field at the time, only its strength.

The clays in ceramic pots contain ferromagnetic minerals, or minerals containing iron. When the clays are heated, the electrons in these minerals align according to the Earth's magnetic field — imagine a series of iron filings lining up in arcs around a bar magnet. Once cooled, the magnetic patterns are locked in for good. The same process occurs when lava cools, so researchers can also detect changes in the magnetic field by studying volcanic rocks.

The researchers are now trying to expand their study of this time period to see if the fluctuations they observed were a regional phenomenon, or more widespread.