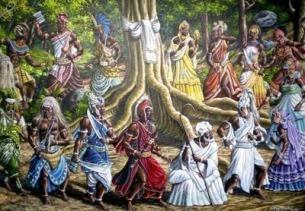 Like many people who eventually found their spiritual home in candomblé I was drawn to it by a deep respect and fascination for the orixás, an admiration of its mythology, and by the charisma of a priest who invited me to join his temple. This priest ushered me into his spiritual home by casting a set of sacred cowries and determining the role my mother's and father's ancestors played in my life, what my destiny (odu) had in store for me, and what deities would guide me through my life. After many months of interacting with the members of the temple, and gaining their acceptance, a date was set for my initiation, whereupon I would receive the title of Odé Aperin, servant of the hunting deity Oxossi.

On the night of my initiation I arrived at the temple wearing old clothes, and was led to an ancestral grove in a candle-lit procession. For the next three days I underwent a series of rituals and libations that invited my deity to take charge of my inner, spiritual head. Due to my special relationship with another priest some rituals were performed in his presence. (Longer, more elaborate rituals are performed on initiates who become fully possessed by their deity.)

On the final day the temple was prepared for a great party, whereupon the hunting deities descended to celebrate life, dance and offer visitors a banquet featuring their favourite foods. Priests from other temples and 'nations' (Candomblé has several 'nations', reflecting the different African nations the slaves came from) arrived and I was presented to the community at large: a long line was formed and all those present embraced me and wished me well. The drummers sang in many different languages (yoruba, fon, bantu) as the night wore on and deities from these different nations arrived.

Once the African deities departed the party continued, the drummers moved outside the temple and played samba. This acted as a 'call' for the ancient spirits of the land (belonging to sailors, Indians, slaves) to 'arrive', arbitrarily possessing priests and other initiates. These fun-loving and mischievous entities made sure that even the shyest person (which was no longer me) had a beer or two before going home.

by Roderick Steel For BBC