British cemetery could be illuminated by energy generated by the deceased 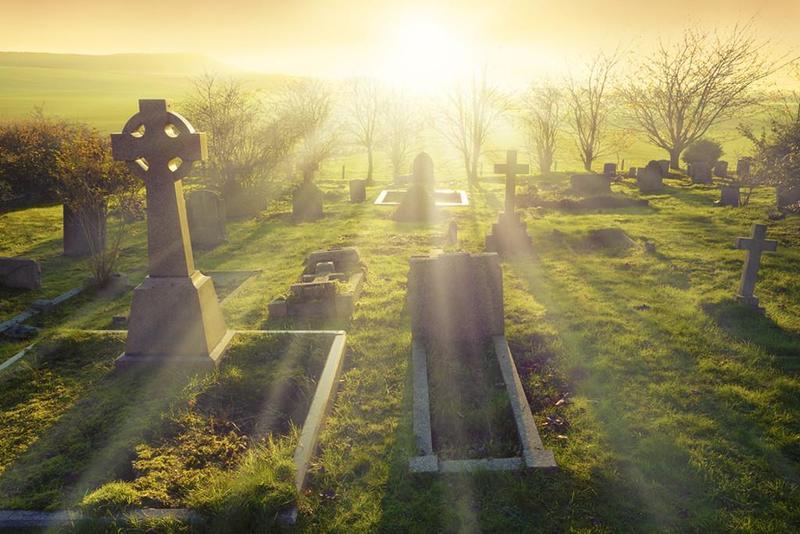 Not all that long ago, options for eternal resting in ash form were largely limited to dusty mantels, somber columbaria or being cast to the wind.

Nowadays, the cremated deceased can be incorporated into spectacular firework shows, transformed into diamonds, pressed into vinyl records, painted into a portrait or inurned 40 feet under in an underwater memorial park that doubles as a marine habitat. Or there’s the opportunity to be blast into outer space a la Timothy Leary and Gene Roddenberry. Like I said, there are plenty of options.

Sylvan Constellation is a proposal from Columbia University’s DeathLAB — no, not a collegiate metal band but a consortium of designers, scholars and researchers within the Graduate School of Architecture, Planning and Preservation focused on “reconceiving how we live with death in the metropolis” — that envisions yet another option: urns that double as pathway lighting at cemeteries.

Using human remains as a source of biofuel, these gently glowing “memorial vessels,” both embedded into the ground and elevated on thin pylons, would help to illuminate darkened cemetery walkways, transforming the biomass of the newly departed into an “elegant and perpetually renewing constellation of light.” Eternal flame, indeed.

Poetic, planet-friendly and conceived with a firm eye toward emerging green technologies, Sylvan Constellation — itself a woodland-based variation of the previous, city-centric Constellation Park concepts that harnesses light from human biomass while saving valuable urban real estate — is being installed this summer at a British cemetery. Well, not quite. A prototype design is being tested by the DeathLAB team to see if the deceased can indeed serve — to riff on a line from the Smiths — as a light that really, truly never goes out.

Sylvan Constellation was recently named as winner of Future Cemetery, a design competition hosted by the University of Bath’s Centre for Death and Society seeking tech-forward yet reverent cemetery concepts — concepts revolving around “architectural and technological innovations” — that can realistically be employed in the not-so-distant future. As the winner, the DeathLAB secured a £5,000 ($7,200) cash prize along with a two-month summer residency working alongside the Centre for Death and Society at historic Arnos Vale Cemetery in nearby Bristol.

The goal of the residency is to “work towards a feasible design for a future prototype,” as a news release published by the University of Bath points out. Dr. John Troyer, director of the Centre of Death and Society, hails Sylvan Constellation as “an outstanding mix of both respectful disposition for human remains and longer term thinking around the disposal of digital data.”

The New York-based DeathLAB team couldn’t be more delighted to spend a chunk of the summer at a cemetery in the southwest of England.

Our team at DeathLAB and LATENT Productions is honoured to have Sylvan Constellation at Arnos Vale selected as the 'first future cemetery.' Our goal is to offer elegant options at death that are commensurate with the social and environmental values we respect while alive. Our proposal aims to secure civic space for the future metropolis, allowing one's last impactful act to gracefully and responsibly celebrate the vitality of life.

Biomass-powered urn-lamp prototypes aside, Arnos Vale Cemetery itself is a fascinating place. Established in 1837, the thickly wooded 42-acre burial ground on the bucolic outskirts of the city was the spot in Victorian-era Bristol to be interred. Like other cemeteries of the time, Arnos Vale, with its sprawling, park-like grounds, wasn’t just a cemetery but a regional destination, a tranquil escape from the city for the living and a fashionable place to bury the dead.

By the 20th century, however, Arnos Vale had fallen into a state of serious disrepair. In 1985, an unscrupulous developer acquired the property, locked the front gates and announced his intentions to build housing atop it. As the Bristol Post explains, both the surrounding community instantly went into full-on defense mode and aggressively campaigned to save the cemetery. The battle to preserve the cemetery and save it from redevelopment stretched out well over a decade, with the community ultimately emerging triumphant.

Today, Arnos Vale Cemetery is a registered historic site managed by the nonprofit Arnos Vale Cemetery Trust. The trust itself oversees ongoing restoration work that aims to bring the property back to its woodsy 19th century grandeur. And like so many aging graveyards adapting to the 21st century, burial isn’t the only business at hand at Arnos Vale. Serving as a popular multipurpose venue for a variety of events including weddings and concerts, the cemetery boasts a robust programming calendar offering everything from yoga classes to outdoor film screenings to bug-hunting expeditions for kids.

This all said, long-term development-minded Arnos Vale Cemetery, already in a state of reinventing itself while also preserving the past, is the perfect place for DeathLAB to test Sylvan Constellation.

Arnos Vale is an extraordinary place. As a cemetery it has always been a pioneer – not only as a pioneer of garden cemeteries in Victorian England, but it was also at the forefront of bringing together different religious groups on one site, as well as pioneering one of the earliest industrial-scale crematoriums in the region.

What makes Arnos Vale almost unique in the world today is its dual role – both as an historic site and heritage cemetery, alongside the fact that it remains a working cemetery, and is still taking people's remains.

We hope we will be able to work with them to develop some sort of prototype of their memorial on the site, which can then be worked on in the longer term. We also hope to put on a public exhibition later in the summer at Arnos Vale explaining more about the project to the public and giving people the opportunity to have their say on the ideas the design team develop during their time in Bristol.

Troyer also notes that roughly 90 percent of residents in the greater Bristol-Bath region choose cremation over traditional burial. That being said, if Sylvan Constellation is found to be feasible and eventually moves beyond the prototype stages to be fully realized, it's pretty much a guarantee that Arnos Vale Cemetery will shine as bright as the heavens.