As Christianity spread across Europe, the Gods of native faiths were disregarded by the Church or absorbed into folklore. Some were demoted to demons in the new Christian lore. Others were changed into heroes of a mythical past where they continued to be revered with magick and significance. Still others, especially those of paramount significance, were adopted as saints. The role of beloved saint was another phase for Brigid.

The concept of a beloved God or Goddess of early Pagan history turning into a saint may be painful one for people who love old religions and Goddess worship. For many, the movement from God to saint may appear a demotion, even though those who’ve loved and admired the saints would probably disagree. Especially in the case of Brigid, the new saint lost few, if any, of her Goddess attributes and has been revered with prestige and power in Ireland on a level only rivaled by St. Patrick.

St. Brigid was identified with the Christian Mother-Goddess figure of Mary, as”Mary of the Gaels,” or occasionally”the Foster-Mother of Christ,” and in certain tales as Mary’s midwife. With the exclusion of the archangels, not many saints enjoy such inclusion with the two main characters in Catholic Christianity. Nevertheless, St. Brigid is a unsaintly character, one famous for screeching across battlefields or flagrant defiance against Church leaders.

St. Brigid is equally historic figure and character of folklore and shared more than a title with her Pagan Goddess counterpart. It’s through St. Brigid the clearest glimpse into Brigid the Goddess could be found. The excellent cathedral of St. Brigid in Kildare, Ireland is thought to have been set up by the saint herself. It’s widely recognized that the church was constructed upon an older Pagan shrine, in which a constant fire was kept in honour of the Goddess Brigid. Much like the legacy of Brig, Brigid was likely a title rather than a name for a leading Druidess the Brig or Great Lady of Kildare. This Brigid oversaw the shrine’s maintenance, later leading its conversion from Pagan to Catholic. Maybe the crafty leader saw a way to preserve veneration of the sacred sites under a seemingly inevitable Christian transformation and coordinated it on her own terms.

The story goes that the Druidess-nun was consecrated as Bishop of Kildare by accident. According to legend, the Bishop Ibor, performing the liturgical rite, read from the wrong passage and gave Brigid a status of power unheard of for women, even in modern Catholicism. If the story is accurate, it was probably not an accident. Druidesses commonly held high posts, although nuns didn’t. To maintain the honored Druidess in a strong position could have been to the Church’s benefit, strengthening alliances with the local inhabitants. Following her death, she became St. Brigid. Even in the new faith, Brigid stayed immortal.

This character entered lore with the exact same ferocity and warriorship found in the Pagan Goddess, in addition to persistent work against poverty. St. Brigid was famous for providing anything she could to people in need. Following her passing, this significant woman was buried in the church of Kildare in an elaborate coffin and allegedly surrounded by treasures and gifts from the community. Soon thereafter, tomb robbers stripped off the tomb of is wealth. Although a sad crime when we consider what sorts of treasures history has lost, it’s true to the heritage of the saint that, in passing, continued to provide all that she had to those in need.

St. Brigid was occasionally believed to have had a female friend or fellow nun from the convent called Darlughdacha, the literal translation of which means”Daughter of the God Lugh,” who himself became the leader of the Kildare abbey upon Brigid’s departure. Other reports say that Brigid was actually Darlughdacha and a daughter of the God Lugh, herself, Brigid being just her title. Brigid and Darlughdacha allegedly shared a bed every night. One day, Brigid caught Darlughdacha gazing at a passing warrior. Brigid demanded she walk in shoes packed with red-hot coals as penance–in sanctity of her convent vows of chastity or perhaps to subdue Brigid’s personal jealousy, suggesting that the two were lovers. 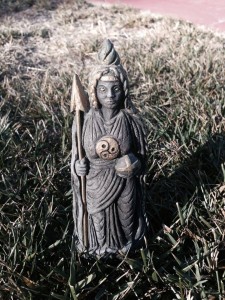 The coals along with the rage are among many, a number of different traits that resonate much more with a Pagan Fire and War Goddess compared to a normal saint. Furthermore, the Church in Kildare has lost few of its Pagan roots. Kildare (cill dara) signifies”Church of the Oak Tree.” Oak isn’t a tree often honored in Christian lore, nor are endless fires commonly devoted to Catholic saints, however both are notable in the reverence of St. Brigid. The difference between the Pagan and Christian rites of Brigid are rather small indeed.

St. Brigid formed an important link in the spiritual and religious life of the very first Irish Catholics in bridging their ancestral faith with the one recently imported. St. Brigid was famous for the miracles of healing, care for animals–especially livestock that produced milk, as did her Pagan incarnation–devotion to the poor, and combating oppressive forces, such as (and sometimes especially) Church leaders. St. Brigid cannot be cast away as a modification of the Goddess. Instead, the canonization of Brigid as a Catholic saint maintained her and stands as a testimony of the Goddess’s enduring significance.

Chaos Store
Read more Ancestral Worship related articlesBook services related with Ancestral Worship
Leave your comments / questions for this practitioner
To write a comment please
or
Services
This category is currently empty though we are working on it. Please review services from the similar categories below.
Go to all Services

“When you come into the land that the Lord your God is giving you, you shall not learn to follow the abominable practices of those nations. There shall not be found among you anyone who burns his son or his daughter as an offeri…

The season of death is upon us. Halloween and the Mexican death trinity of Day of the Dead, Catrina Calavera (Skeleton Dame), and Santa Muerte (Saint Death) engage millions of North and South Americans in rituals that reconnect us with our own mortality. …

“When you come into the land that the Lord your God is giving you, you shall not learn to follow the abominable practices of those nations. There shall not be found among you anyone who burns his son or his daughter as an offeri…

The season of death is upon us. Halloween and the Mexican death trinity of Day of the Dead, Catrina Calavera (Skeleton Dame), and Santa Muerte (Saint Death) engage millions of North and South Americans in rituals that reconnect us with our own mortality. …