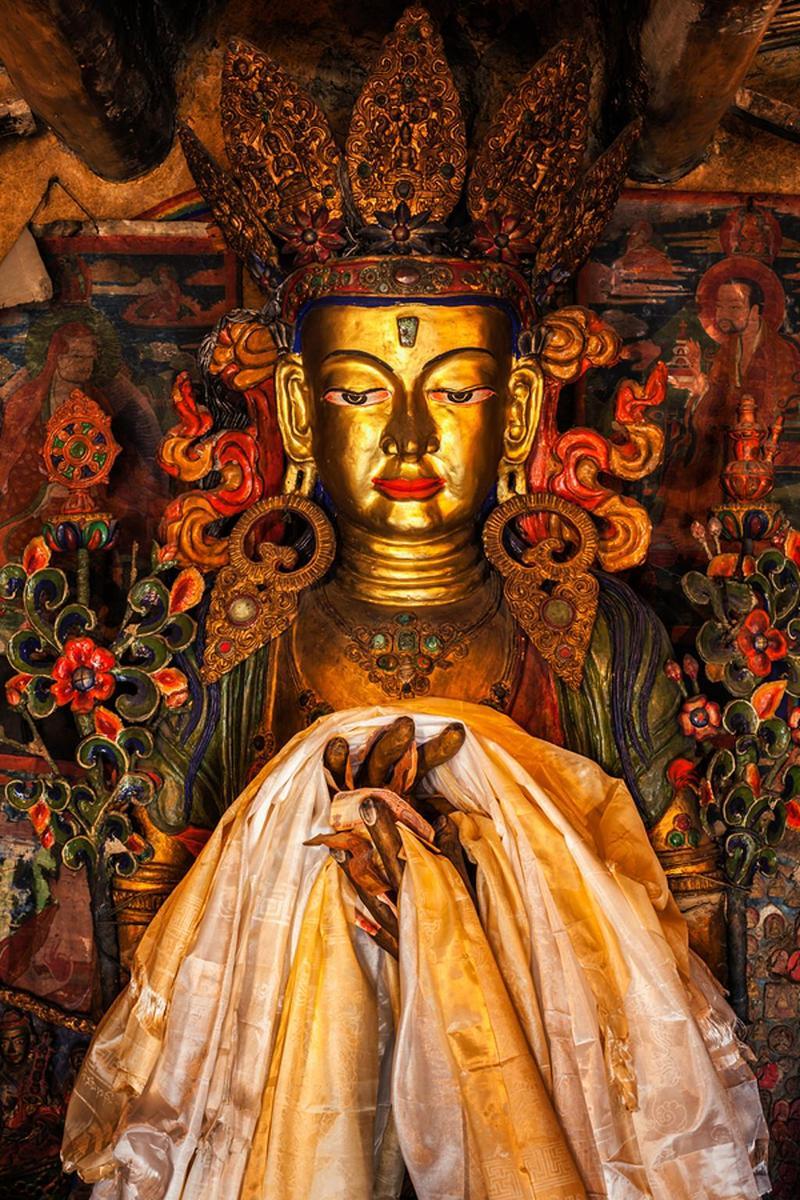 There are books, too numerous to mention, that relate the story of the historic Buddha, Prince Gautama Shakyamuni, and explain his teachings and the basic concepts of the spiritual insight that he attained. Buddhism comprises three major branches or schools, which, despite differences in emphasis and focus, are based on the Buddha's fundamental precepts and teachings.

Asia, in such countries as Thailand, Burma, and Sri Lanka. Because of the dismissive connotation of the term Hinayana, which means "lesser vehicle," its followers prefer the name Theravada, or Way of the Elders (meaning the early disciples of the Buddha); it is also called the "Old Wisdom" school. Its followers claim with justification that it remains closest to the original teachings of the Buddha.

Mahayana Buddhism developed in northern India, and although Buddhism was driven from India after the Moghul invasions and conquest of India between the twelfth and fourteenth centuries, Mahayana took root in the Himalayan countries -- Nepal, Tibet, Bhutan and Sikkim -- as well as in China, Japan and Korea. (Reference herein to "Tibetan Buddhism" refers broadly to the Buddhism of the countries and regions of the broader Tibetan cultural world: not only Tibet but also Bhutan, Sikkim, northern Nepal, northwestern India, and Mongolia.) Although the Theravadins claim seniority, the Mahayana movement was a fairly early development, and has been traced back to the first century B.C.E., or even earlier. Mahayana, meaning "greater vehicle," is a broader, more inclusive school, with a more ambitious approach and more visionary concepts. It is in light of Mahayana's grander aims that the term "lesser vehicle" came into use. Yet Mahayana and Theravada are branches of the same tree, and should not be considered as radically different or distinct.

These two schools, Theravada and Mahayana, can be broadly differentiated by their separate focus, as well as by more subtle differences of interpretation. Theravada emphasizes individual, personal pursuit of salvation or liberation -- "nirvana." In Theravada, supreme attainment is represented by the arhat, a spiritual master who has achieved enlightenment by his own efforts. The arhats, even the legendary ones, were ostensibly human beings. The ideal of Mahayana, on the other hand, is the Bodhisattva -- a spiritual hero. A Bodhisattva is a being, divine or human, who, upon reaching the threshold of enlightenment, chooses instead to remain behind, enduring the endless cycles of life, death, and rebirth (samsara) in order to help all other beings achieve enlightenment. In an act of self-sacrifice, delaying personal liberation, the Bodhisattva takes a mighty vow of dedication to this truly superhuman goal. The celestial Bodhisattvas are among the stars of the pantheon of Mahayana Buddhism, the best known of them the objects of profound devotion. But the path of the Bodhisattva is open to human beings as well, who may also take the great vow and dedicate themselves to the benefit and liberation of all beings.

The concept and cult of the Bodhisattva is a distinctive, quintessential feature of Mahayana. Yet it would be incorrect to assume that Theravadins do not also uphold the ideal of compassion and they believe that one gains merit from acts of mercy, kindness and generosity.