Home/Articles/Blackfoot: History of the Blood Tribe

Blackfoot: History of the Blood Tribe 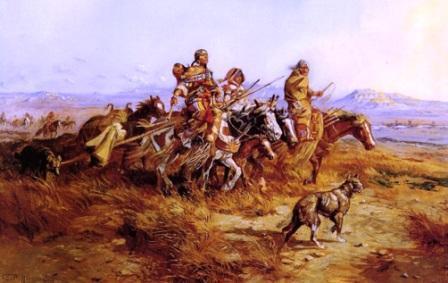 Treaty Seven was a peace treaty made between two nations, the tribes of the Blackfoot Confederacy (Siksika, Peigan, and Bloods), the Tsuu T'ina Nation (formerly known as the Sarcee), the Stoney (Bearspaw, Chiniki and Wesley/Goodstoney), and the Queen of Great Britain and Ireland. She was represented by her Commissioners, the Honourable David Laird (Lieutenant Governor and Indian Superintendent of the North-West Territories), and James Farquharson Macleod-C.M.G. (Commissioner of the North-West Mounted Police).

When Treaty Seven was signed in 1877, it became the last in a series of agreements concluded between the Government of Canada and the Indians of the North-West. Once Treaty Seven was signed, more than twenty years would pass before another treaty would be made. Treaty Seven complete the task which the government had set out to accomplish after it acquired control of Ruper-t's Land in 1870.

The government needed to sign a treaty with the Indians of Southern Alberta in order to ensure avenues were in place to allow it to pursue its effort of making British Columbia part of Confederation. In 1871, the Canadian government had promised to build a transcontinental railway within ten years of British Columbia becoming apart of Confederation, such a railway line would have to cross the Indian lands. The existence of the line would help with the government's intention of promoting immigration and movement of recently arrived European immigrants to settle the western prairies. When the British North American Act was passed in 1876, the government undertook the responsibility of Indian and their lands.

Furthermore, the government through the Royal Proclamation of 1763 was bound to the terms recognizing Indians as rightful occupiers of their hunting grounds until such time as these were ceded to a government authority. This meant that the railway could not be built until the land ownership rights of the Indians along the proposed route had been resolved. Therefore, during the period from 1871 to 1876, the government of Canad systematically pursued treaties with all tribes in the arable regions of what was then known as the North-West Territories.

The exception was some 50,000 square miles of land south of the Red Deer River and adjacent to the Rocky Mountains. The historical land owners of this area were the Blackfoot tribes, the Tsuu T'ina Nation, and the Stoney tribes. The articles of Treaty Seven outlined the areas where the present day reserves now exist. The signing of Treaty Seven occurred at "Blackfoot Crossing" which is located on the Siksika Indian Reserve east of Calgary.

In summary, Treaty Seven's conditions ere that one square mile be allotted for each Indian family, plus a fixed supply of cattle, farm equipment (one plow for each band), and a small amount of treaty and ammunition money. The treaty also made commitments to provide education for all native children and medical services for all treaty Seven Members.

When the Bloods signed Treaty 7 in 1877, they did not intend to give up their buffalo hunting, nomadic life to settle on the reserve. As a result, when Crowfoot, head of the Blackfoot suffused the Sarcee, Bloods and Blackfoot all live together on a reserve near Blackfoot Crossing, the Bloods agreed. However, as the buffalo herds began to diminish in size, the Chiefs decided the original reserve would be a poor location. In the fall of 1880, Chief Red Crow and Indian Commissioner Edgar Dewdney met at Fort Macleod where the Bloods surrendered their claims to the lands at Blackfoot Crossing and requested a reserve be located on the Waterton Reserve.

When Red Crow and the local Indian agent, Norman T. Macleod went to visit the site, further discussion as to location occurred and the Bloods agreed to settle on land between the Waterton River and the Belly Butte. About 800 Blood Tribe members spent the first winter on the reserve with about 2500 of the band remaining in Montana.

In the spring of 1881, the remainder of the Bloods returned from Montana, bringing the problems of overcrowding and starvation. The reserve had grown from about 800 people to over 3,300 in just a few weeks. In 188 1, the Governor General of Canada, the Marquis of Lome, visited the Bloods and it was requested that the Standoff bottom be included in the reserve. It is unclear as to what the Governor General's answer was, but the Bloods understood their request to be approved and commenced settling along the river basin. A new Indian agent, Cecil Denny, told the Bloods to stay on the south side of the Belly River, and Red Crow agreed to stay on the land between the Belly River and St. Mary's River to the Rocky Mountains.

In 1882, the Bloods reported a population of 3,542 people which should have entitled them to a reserve of 708.4 square miles. However, during 1882 and 1883, Indian agent Denny had the reserve surveyed and adjusted the treaty records claiming padding of numbers and inclusion of members who were actually South Peigans from Montana. As a result, the reserve was reduced to 547.5 square miles.

On July 2, 1883, the Blood Chiefs gathered at the agency to sign a new treaty with the government. In this treaty, the Bloods gave up all rights to the old reserve at Blackfoot Crossing and they were given a new reserve described as "commencing on the north bank of the St. Mary's River ... thence extending down the said bank of the river to its junction with the Belly River, thence commencing up the south bank of the-latter river to a point thereon in north latitude forty-nine degrees, twelve minutes and sixteen seconds..and thence easterly along a straight line to the place of the beginning."