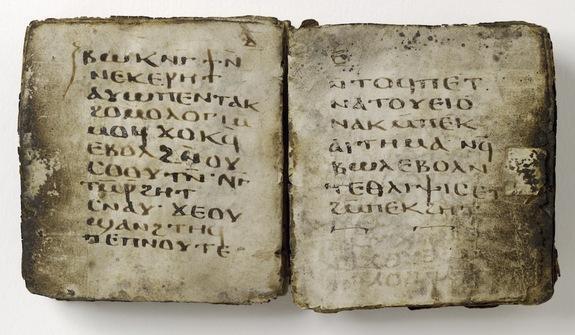 An ancient Christian oracle book of mysterious origins has been recently translated and found to contain a collection of encouragements, warnings, and cryptic divinations.

The 1,500-year-old tome, measuring less than three inches (7.5 centimeters) in height, has been translated from Coptic, an Egyptian language, and has surprised experts who initially presumed it was a typical gospel as understood in the traditional sense – a recounting of the life and death of Jesus. However, despite being titled “The Gospel of the Lots of Mary”, the miniature codex is not about Christian figures, but instead a book of guidance and reassurance, to be used as a resource for those seeking help for life’s problems.

According to LiveScience, the volume is very unique. Professor of religion at Princeton University, AnneMarie Luijendijk writes in her book “Forbidden Oracles? The Gospel of the Lots of Mary”, “When I began deciphering the manuscript and encountered the word 'gospel' in the opening line, I expected to read a narrative about the life and death of Jesus as the canonical gospels present, or a collection of sayings similar to the Gospel of Thomas (a non-canonical text).”

However, upon translation of the elegantly written text, Luijendijk discovered few references to Jesus in the series of 37 oracles.

The gospel may have been used for divination, and predictions of the future. LiveScience writes that a person with a problem could have asked a question of the book, and gone through a process of randomly selecting one of the passages. The book owner may have assisted as a diviner, interpreting the written word. It is also suggested the book might have been referred to by an owner when needing guidance or solutions – it may have been opened to a random page to find divinely-inspired advice.

International Business Times provides examples of the translated entries, citing: “You know, o human, that you did your utmost again. You did not gain anything but loss, dispute, and war. But if you are patient a little, the matter will prosper through the God of Abraham, Isaac, and Jacob.” Another entry reads: “Stop being of two minds, o human, whether this thing will happen or not. Yes, it will happen! Be brave and do not be of two minds. Because it will remain with you a long time and you will receive joy and happiness.” Divination is from the Latin ‘to foresee’ or ‘to be inspired by god’. The idea of gaining insight into the future, or learning the answers to troubling questions through occultic rituals and with sacred objects is a practice that has existed through time and across cultures around the world. Not unlike fortune cookies, horoscopes, tarot cards or other means of divination, ‘The Gospel of the Lots of Mary’ seems a tool of sortilege.

Luijendijk writes that sortilege “—the practice of casting lots to obtain an answer—was widespread in antiquity; it was a method applied in decision-making on all levels of ancient society. As a religious practice, lot divination was also highly contested, as access to these practices and thus to the divine meant control of powers, religiously and socially.”

This discovery follows the translation of another ancient Egyptian codex written in Coptic which dates back 1,300 years. Deciphered for the first time in 2014, the 20-page book made of parchment contains a series of spells and invocations, including spells to counter evil possession. The codex reflects a fusion of religions, as some invocations call upon Jesus, while others refer to divine figures from the Sethian religion, considered heretical in the 7th century AD when the text was created. Dubbed the “Handbook of Ritual Power”, it includes a series of invocations with drawings, followed by twenty-seven spells, including prescriptions to cure possession by evil spirits, spells to bring success in love and business, and magical formulas to treat ailments such as a ‘black jaundice’, a potentially fatal infection that is still around today.

“The Gospel of the Lots of Mary” is significant in many ways, especially as it calls itself a ‘gospel’. Luijendijk tells LiveScience, “The fact that this is not a gospel in the traditional sense gives ample reason to inquire about the reception and use of the term 'gospel' in Late Antiquity.” She speculates that perhaps the “good news” wasn’t the story of Jesus, but was literally the reassuring information found in the passages. Being only as large as the palm of a hand, the book’s size is of note. It’s thought the manuscript was purposefully kept miniature so as to be easily transported, or even hidden when necessary from disapproving religious leaders. The origins of “The Gospel of the Lots of Mary” are unknown. It was donated in 1984 by Beatrice Kelekian to Harvard University’s Sackler Museum in memory of her husband, Charles. Luijendijk writes that Charles Kelekian’s father Dikran was “an influential trader of antiquaries”, but where the Keledians originally got the gospel remains a mystery. Whatever the origins of the ancient tome, it has seen some travel and has been obviously well used; ancient thumbprints of readers-in-need still mark the margins.