An Ancient City Emerges in a Remote Rain Forest 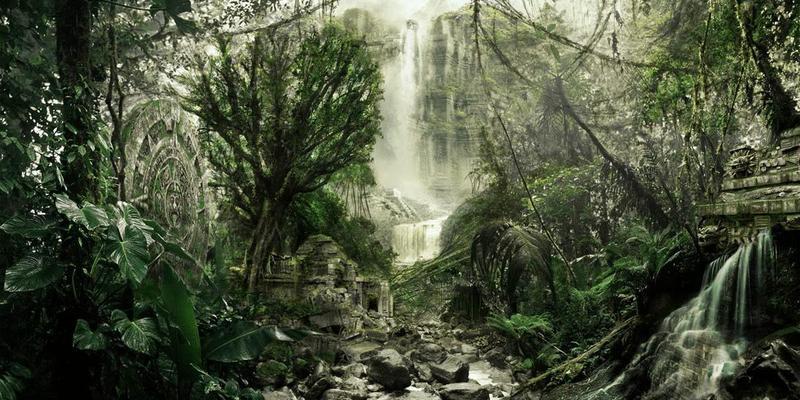 ost of the important archaeological sites in Central America were “discovered” by archaeologists who, in fact, didn’t discover them at all but were led to the ruins by local people. I’ve known several Maya archaeologists who routinely started fieldwork in a new area by heading into a dive bar and hoisting beers with the locals while listening to various bullshitters spin tales about ruins they’d seen in the jungle; once in a while, a story would turn out to be true. But, because these sites were long known to local people, they had invariably been disturbed, if not badly looted.

The revelation of an ancient city in a valley in the Mosquitia mountains, of Honduras, one of the last scientifically unexplored regions on Earth, was a different story. This was the first time a large archaeological site had been discovered in a purely speculative search using a technology called lidar, or “light detection and ranging,” which can map terrain through the thickest jungle foliage, an event I chronicled in a story in 2013. As a result, this discovery revealed something vanishingly rare: a city in an absolutely intact, undisturbed, pristine state, buried in a rain forest so remote and untouched that the animals there appeared never to have seen people before.

After the piece came out in The New Yorker, I returned to the region with a joint Honduran-American archaeological expedition to explore the city on the ground. On February 17, 2015, our helicopter landed in a slotlike zone macheted out of a stand of heliconia, next to an unnamed river in the valley scientists had nicknamed Target One, or T1. There were five of us, along with three British ex-S.A.S. jungle-warfare specialists, whose job was to keep us alive for the next nine days.

We climbed a steep embankment and entered the rain forest through a dark hole freshly cut into the jungle, emerging in a gloomy forest, with trees rising like giant cathedral columns into the canopy. Their trunks, ten to fifteen feet in diameter, were braced with massive buttresses and knees. Many were wreathed in strangler figs, called matapalos, or tree killers.” The air carried a heady scent of earth, spice, and rotten decay. As I wrote in National Geographic magazine, later that year, there was no camp waiting for us; we each had to slash out our own personal clearing with a machete. Purring jaguars prowled about our tents at night along with other unseen beasts. We encountered deadly fer-de-lance snakes almost every day.

Entering the ruins was a disappointment. If the Mosquitia jungle were superimposed on Times Square, the foliage would be so thick that you would have no inkling you were in the midst of a city. Even standing at the base of an earthen pyramid in the central plaza of T1, surrounded by earthworks, terracing, and mounds, I had not the slightest idea that this was the main public space of what had once been a thriving city of thousands. Only through technology did we know our location in the ruins. The chief archaeologist on the expedition, Chris Fisher, carried a sophisticated Trimble G.P.S. displaying a digital lidar map of the city with the trees removed, and our location pinpointed on it. As we moved through the jungle, Chris would check the Trimble and say, “There’s a big mound thirty feet ahead,” but we could see nothing but leaves until we practically walked into it. We had to win every foot by machete, our blades marked with stripes of pink Day-Glo tape so we could avoid one another’s slashing strokes cutting through the vegetation. Even so, we had some close calls.

On the third day, we a stumbled over a cache of objects at the base of the pyramid that would prove to be of singular importance. As we were strolling past a leafy hollow in the drenching rain, a team member spied, peeking from the leaves, the carved head of a snarling jaguar. A shout went up and everyone crowded in to see. Just poking out of the ground were the tops of dozens of stone sculptures. The objects took shape in the forest twilight: vessels with carved rims; thrones decorated with the heads of half-animal, half-human deities; bowls; and effigies. They were all almost entirely buried, with only the tops visible, like stone icebergs.

I can recall the very moment when I first saw that jaguar head coming out of the ground. Gleaming with rain, it rose up snarling, as if struggling to escape the earth. It was an image that spoke directly across the centuries—forging an immediate, emotional connection to these vanished people. What had been theoretical became real: this spirited image had been created by people who were confident, accomplished, and formidable. Standing in the gloom among the ancient mounds, I could almost feel the presence of the invisible dead.

Fisher, the expedition’s chief archaeologist, a professor of anthropology at Colorado State University, in Fort Collins, and an authority on both lidar and Mesoamerican culture, would eventually uncover close to five hundred sculptures and fragments in an area no larger than two hundred square feet. The objects had been left all at the same time, probably when the city was abandoned. Most of the artifacts had been ritually smashed, a common practice in the Americas for goods placed in a grave, to release their spirits. Also of significance was the statue positioned in the center of the cache—a half-human, half-vulture figure that probably represented a shaman or priest in a transformed state. Vultures, in the ancient world of Honduras, were a symbol of death and the transition to the spiritual world.

Taken together, these clues suggested that this was not a grave for an individual; it was the cenotaph for the entire city. Around 1500, something catastrophic appeared to have happened in T1 that triggered the abandonment of the city, with the survivors leaving this cache as a final offering to their gods before they departed. Here it had lain for five hundred years. But what had happened? It could not have been conquest by the Spanish, as no Spaniards (or any Europeans) had ever penetrated these remote mountain valleys.

It was, more likely, disease that had devastated this city. To understand the collapse of this mysterious civilization, we have to go back to October of 1493, when Columbus set sail on his second voyage to the New World with an enormous flotilla of seventeen ships carrying fifteen hundred men and thousands of head of livestock. Columbus and his men also unwittingly carried microscopic pathogens from Europe, to which the people of the New World had no genetic resistance. His travels throughout the Caribbean unleashed the first of a series of deadly pandemics that swept the Caribbean and Central America.

The fortress-like valley of T1, ringed by mountains, with only one point of entry, was nearly invulnerable to invasion. The people of T1 had nothing to fear from European conquest. But they were vulnerable to European diseases, especially smallpox and measles, which burned far ahead of actual European contact, triggering large population collapses. Anthropologists have documented that, between 1518 and 1550, almost ninety per cent of the native people of Honduras died of disease.

Those pathogens invaded Mosquitia via two pathways. The first was through trade. When Columbus landed in Honduras’s Bay Islands, he described a memorable sight: a huge trading canoe, eight feet wide and sixty feet long, manned by twenty‐five paddlers. The canoe was heaped with valuable trade goods: copper, flint, weapons, textiles, and beer. There was extensive maritime trade throughout the Caribbean and Central America, some of which undoubtedly went up the two main highways, the Río Plátano and the Río Patuca, into Mosquitia. There can be little doubt these traders, peddling goods from the islands and coasts, carried European pathogens into the hinterlands, where the microbes escaped into the local populations.

A second likely track of infection was the slave trade. Before slavery was restricted by the Spanish crown, in 1542, slaving parties scoured Honduras, kidnapping Indians to work plantations, mines, and households. The first slaves were captured from the islands and coasts. As disease wiped out these early captives, the Spanish raiders went deeper into the countryside to find replacements. (The African slave trade also ramped up at this time.) By the fifteen-thirties, the slavers were ravaging the Mosquito Coast and the Olancho Valley of central Honduras, destroying villages and rounding up people like cattle. On three sides—west, north, and south—the Mosquitia mountains were surrounded by slave raids. Thousands of Indians fled their villages and took refuge in the rainforest, disappearing into the mountains of Mosquitia. Some of these refugees, unfortunately, carried European disease into the otherwise well‐protected interior valleys, including T1.

If we follow this scenario to its conclusion, then sometime in the early fifteen hundreds several epidemics of disease probably swept T1 in close succession. If the mortality rates were similar to the rest of Honduras, ninety per cent of the inhabitants died of disease. The survivors, shattered and traumatized, prepared to abandon the city. Their final act was to gather up their sacred objects, arrange them at the base of the pyramid, smash them, and then depart, never to return.

Europe’s Black Death, at its worst, carried off thirty to sixty per cent of the population. That was devastating, but the mortality rate wasn’t high enough to destroy European civilization. A ninety-per-cent mortality rate is high enough: it does not just kill people; it annihilates societies. The survivors are deprived of that vital human connection to their past; they are robbed of their stories, their music and dance, their spiritual practices and beliefs. Think what it would be like for you to watch all these people die—your children, parents, grandparents, brothers and sisters, your friends, your community leaders, merchants, and spiritual authorities. Imagine the wasteland left behind, the towns and cities abandoned, the fields overgrown, the houses and streets strewn with the unburied dead; envisage the wealth rendered worthless, the stench, the flies, the scavenging animals, the loneliness and silence. This inferno of contagion destroyed thousands of societies and millions of people, from Alaska to Tierra del Fuego, from California to New England, from the Amazon rain forest to the tundra of Hudson Bay. It was the greatest catastrophe ever to befall the human species. The death of T1 was but one tile in this vast mosaic of annihilation.

We have few accounts giving the Native American point of view of these pandemics. One of the most moving is a rare contemporary eye‐witness description, called the “Book of Chilam Balam of Chumayel,” which recalls the two worlds, before and after contact. It was written by an Indian in the Yucatec Mayan language:

There was then no sickness; they had no aching bones; they had then no high fever; they had then no smallpox; no stomach pains; no consumption… At that time people stood erect. But then the teules arrived and everything fell apart. They brought fear, and they came to wither the flowers.