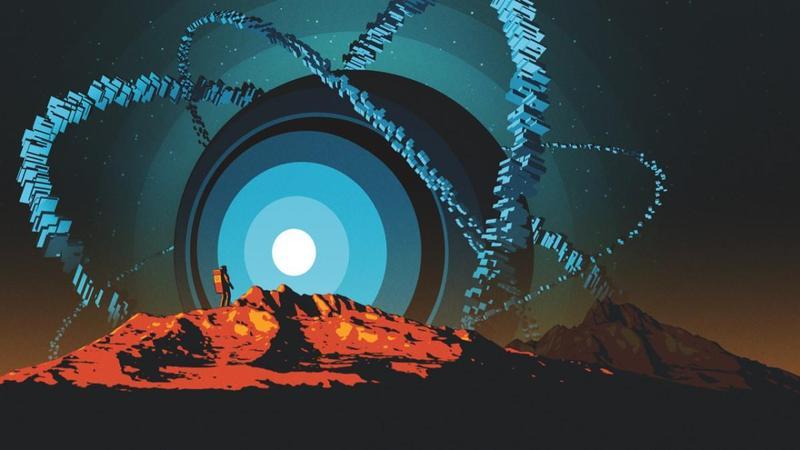 Astrophysicist Paul Davies at Arizona State University suggests that advanced technology might not even be made of matter. That it might have no fixed size or shape; have no well-defined boundaries. Is dynamical on all scales of space and time. Or, conversely, does not appear to do anything at all that we can discern. Does not consist of discrete, separate things; but rather it is a system, or a subtle higher-level correlation of things.

Are matter and information, Davies asks, all there is? Five hundred years ago, Davies writes, " the very concept of a device manipulating information, or software, would have been incomprehensible. Might there be a still higher level, as yet outside all human experience, that organizes electrons? If so, this "third level" would never be manifest through observations made at the informational level, still less at the matter level.

We should be open to the distinct possibility that advanced alien technology a billion years old may operate at the third, or perhaps even a fourth or fifth level -all of which are totally incomprehensible to the human mind at our current state of evolution.

Susan Schneider of the University of Pennsylvania appears to agree. She is one of the few thinkers—outside the realm of science fiction— that have considered the notion that artificial intelligence is already out there, and has been for eons.

Her study, Alien Minds, asks "How would intelligent aliens think? Would they have conscious experiences? Would it feel a certain way to be an alien?"

While we are aware that our culture is anthropomorphizing, Schneider imagines that her suggestion that aliens are supercomputers may strike us as far-fetched. So what is her rationale for the view that most intelligent alien civilizations will have members that are superintelligent AI?

Schneider presents offer three observations that support her conclusion for the existence of alien superintelligence.

The first is "the short window observation": Once a society creates the technology that could put them in touch with the cosmos, they are only a few hundred years away from changing their own paradigm from biology to AI. This “short window” makes it more likely that the aliens we encounter would be postbiological.

The short window observation is supported by human cultural evolution, at least thus far. Our first radio signals date back only about a hundred and twenty years, and space exploration is only about fifty years old, but we are already immersed in digital technology.

Schneider's second argument is "the greater age of alien civilizations." Proponents of SETI have often concluded that alien civilizations would be much older than our own “…all lines of evidence converge on the conclusion that the maximum age of extraterrestrial intelligence would be billions of years, specifically ranges from 1.7 billion to 8 billion years.

But she suspects something stranger than this: that they will not be carbon-based. Uploading allows a creature near immortality, enables reboots, and allows it to survive under a variety of conditions that carbon-based life forms cannot. In addition, silicon appears to be a better medium for information processing than the brain itself. Neurons reach a peak speed of about 200 Hz, which is seven orders of magnitude slower than current microprocessors.