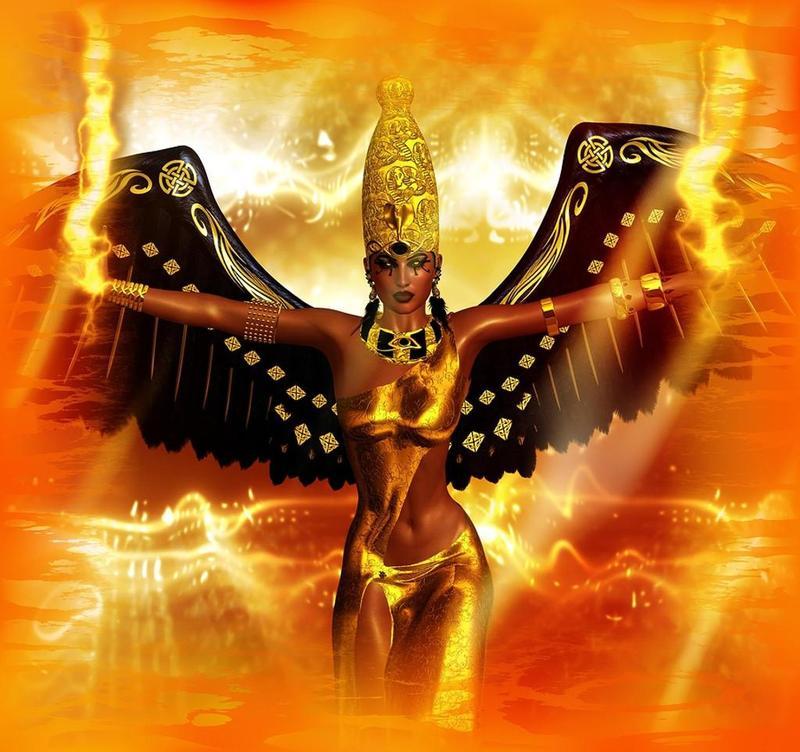 Egyptian religion had ancient origins and lasted for at least 3,500 years. The Egyptians saw divinity in everything — in river, desert, and vegetation; in the sun, moon, and stars; in animals and kings; in birth and death. They created a vast and confusing multitude of gods.

There are literally hundreds of deities, some having animal form, some depicted with human bodies and animal heads, and some of human form. A god like Ra had dozens of names, and often gods had two or more shapes apiece. Political and priestly pressures sometimes brought in new gods and swept the old ones aside. Furthermore, Egyptian religion was local, with different religious centers having different gods and cosmogonies. After listing a few of the major gods, we will give the account of the creation according to the priests at Heliopolis.

Of myths proper there is only one of which we have a complete account — the story of Osiris. The Egyptians took their myths for granted, passing them down by word of mouth without ever fully recording them. The reason we have the myth of Osiris is that Plutarch, the Greco-Roman historian wrote it down.

Ra was the great sun god at Heliopolis. A child in the early morning, a man in his prime at noon, and an old man in the evenings Ra journeyed through the underworld at night to be reborn at dawn. His head was crowned with a solar disk upon which rested the sacred asp, destroyer of the god's enemies.

Shu and Tefnut, were Ra's children. Shu, the god of air, held up the sky and was represented with an ostrich feather on his head. His sister and wife, Tefnut, was a goddess of dew and rain. She was represented as a lioness or as a woman with the head of a lioness.

Geb and Nut were the offspring of Shu and Tefnut. Geb was the god of earth, while Nut was the sky goddess. Geb was usually shown as a prostrate man, and Nut arched over him as a woman or a cow. They were separated by their father, Shu.

Osiris was the first child of Geb and Nut, a god of nature and vegetation but also the judge of the dead in the underworld. He was instrumental in civilizing the world, yet was murdered by his envious brother, Set. Osiris was shown as a man in mummy wrappings, crowned with a miter and two ostrich feathers.

Isis, a daughter of Geb and Nut, was the faithful wife of Osiris and a beneficent sorceress. She enjoyed a large cult in antiquity and was represented with a throne on her head.

Set was Osiris' evil brother, the incarnation of wickedness and sterility. He was depicted with a beastly head and tail.

Nephthys was Set's sister and consort, but she loved Osiris and, through cunning, had a child by him. She wore a basket on her head.

Horus, the falcon-headed son of Osiris and Isis, was dedicated to avenging his father's murder.

Anubis, the jackal-headed son of Osiris and Nephthys, prepared the dead and ushered them into the underworld.

Thoth was the god of learning, a benefactor to gods and men. He was the sacred scribe and was shown as a man with an ibis head.

Hathor, the goddess of joy and love, protected women. She was represented as a cow.

Amon, king of the gods, was a patron of the Pharaohs and a god of fertility. He had a plumed crown and was shown with either a ram's head or a human one.

Men was the monotheistic god presented by the reforming Pharaoh Akhenaton. He was represented simply by a solar disk with rays.

Khepri, the scarab beetle god, rolled the sun before him through the sky and symbolized the ideas of rebirth and eternal life.

Maat, the goddess of truth and justice, was represented as a woman sitting on her heels or standing and wearing an ostrich plume.

The Pharaoh, or king of Egypt, was worshiped as a god and was believed to have descended from gods.

Sacred animals who were worshiped as gods include Apis, the bull; Petesuchos, the crocodile; Ba Neb Djedet, the sacred ram; and Bennu, the bird. But many other animals were regarded as holy, including cats and dogs.