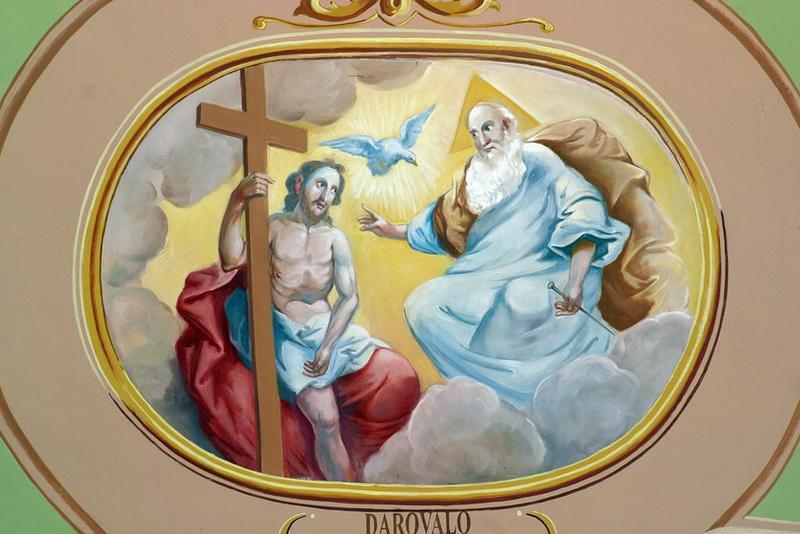 “In the name of the Father, the Son and the Holy Spirit...”

The concept of a Trinity or triadic nature of the divine has been a part of our psyche for thousands of years, and has appeared in creation tales, myths, religious writings and holy texts the world over. Yet to this day, the Trinity is always thought of as having its origin in Roman Catholicism—most notably at the Council of Nicaea in AD 325, the first ecumenical council of Christian bishops where the consensus of beliefs was decided upon for all of Christendom, including the Trinity as the three-fold nature of the persona of God.

Yet references to the Trinity or something like it occur in many major and minor religions. Scholar Elaine Pagels studied sacred texts and wrote in The Gnostic Gospels (1979) that early Christian concepts of the Trinity were molded from Judaic terminology for the description of a genderless God, later “masculinized” by the Christians. In the ninth century AD Celtic philosopher Erigena challenged Augustine’s rather anthropomorphic Trinity view of Three-Persons-in-One-God with his far more philosophical views of God as Nothing and Everything.

According to Karen Armstrong in her seminal A History of God (1994), Christian church leadership struggled to maintain control of the doctrine it would present to the public, including a comprehensible interpretation of the Trinity as the personas of God, despite the resistance of those not capable of seeing God as any structure or “personage.” This struggle continues today in churches where the concept of the Trinity presents a vague understanding of who God is and why God must have three different “faces.”

The Trinity has remained one of the most elusive of holy mysteries in the body of Christianity, and one that draws debate in Catholicism even today as modern church-goers seek a more foundational understanding of why God’s “person” is three-fold and not singular, yet containing all. All is One. One is All.

The Trinity in Global Religions

Interestingly, Judaism would reject the Trinity based on their belief that giving Jesus divinity at all was blasphemous. To the Jews, Jesus was a man, not a divine persona or aspect of God. Islam had its own Trinity in the Father, the Son and Maryam or Mary and is the only religion to include a feminine aspect of the divine Godhead.

Trinities appear in eastern traditions as well. Modern translations of The Tao Te Ching (1996); The Essential Kabbalah (1995); The Bhagavad-Gita (1986); and The Tibetan Book of the Dead (1994) all serve to provide unusual insights into how this concept of a three-fold nature of reality, and our role in it, is seen and understood. Eastern traditions remove the aspect of a Godhead, or divine figure described by the Trinity.

In The Tibetan Book of the Dead, the “Three Bodies of Buddhahood,” present triadic levels of existence. A person is responsible for his or herself on all three levels. As Buddhahood, the triad becomes the Three Buddha Bodies; ordinary body becoming the Emanation Body, speech the Beatific Body, and the mind the Truth Body. The three Buddha Bodies correlate with body, mind and spirit, and we might go so far as to say with the concept of the Father as God, the Son as personhood and the Holy Spirit as the process by which a person becomes one with God, and also suggest a more unified and process-oriented explanation for the Trinity.

We even see parallels in The Tao Te Ching in the “Three Jewels” or “Three Treasures” of the Buddha, the Dharma (law or action) and the Sangha (community). The Jains recognize the Trinity of samyag-darsana (correct insight), samyag-jnana (correct knowledge), and samyag-caritra (correct conduct).

In The Bhagavad-Gita , there is the threefold nature of the Self, as told to Arjuna by the Hindu God Krishna, and in The Kabbalah , the mystical branch of Judaism, we find similar concepts of Holy Breath as necessary for union with the Divine, and the three original emanations from Ein Sof , All That Is - Nothingness, Wisdom and Understanding. These three emanations serve as the basis upon which all other existence upon the Tree of Life was formed and the essence of which followers were urged never to try to understand. Perhaps the vague nature of the Catholic Holy Trinity is something followers are not meant to understand either, at least not on a conscious level.