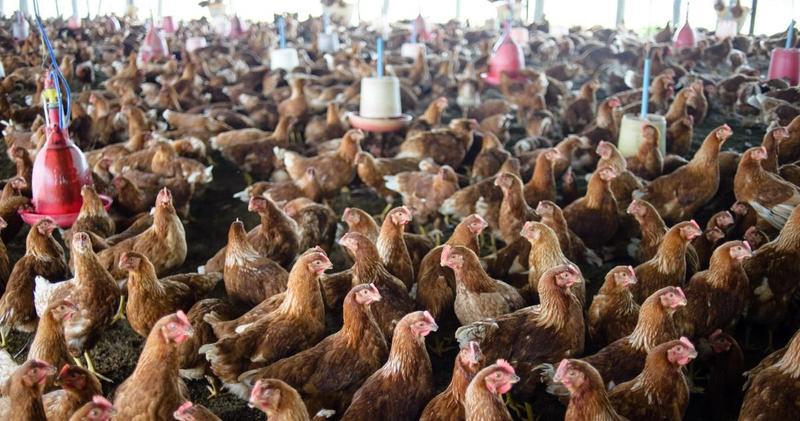 Humans have raised domesticated livestock for meat for millenia, but factory farming as we know it today — that is, raising poultry, pigs, or cattle in close quarters and under rigidly controlled conditions — is less than a century old. It was made possible by science and technology.

As historian Yuval Noah Hariri has written: “With the help of vaccinations, medications, hormones, pesticides, central air-conditioning systems, automatic feeders, and lots of other novel gadgets, it is now possible to cram tens of thousands of chickens or other animals into tiny coops, and produce meat and eggs with unprecedented efficiency — but also with unprecedented misery.”

Supporting small-scale farms or embracing natural foods — whatever that might mean — won’t end that misery. More science just might. A new breed of scientists say that their work on what’s being termed “clean meat” has the potential to replace factory farms, which produce lots of cheap meat but do incalculable harm to the environment, to human health, and to the well-being of farm animals.

Much of the initial progress in developing alternatives to meat has been driven by scientists at startups like Beyond Meat and Impossible Foods, which make plant-based protein products marketed as burgers and sausage and sold in restaurants and supermarkets. Other researchers work at Silicon Valley startups like Just Inc. and Memphis Meats that are developing cell-based meat — meat biologically identical to the real thing that is grown from a few cells cultured from live animals. Academic research into meat alternatives is also growing, fueled by philanthropic and corporate funding that amounted to more than $6 million in 2019.

In an effort to advance the field, the Good Food Institute, a nonprofit that promotes clean meat, awarded $3 million to 14 scientists to research plant-based and cell-based meats earlier this year.

“A lot of effort and investment is going into making better products,” says Dr. David Lipman, the chief science officer at Impossible Foods and a former director of the National Center for Biotechnology Information.

That said, it’s still early days for the science. The meat industry, after all, has benefited from decades of research, much of it government funded, into animal agriculture. By comparison, the science of “clean meat” — which includes both the commercial meat-like products made from plants and still experimental cell-based meat — is young.

In an effort to advance the field, the Good Food Institute, a nonprofit that promotes clean meat, awarded $3 million to 14 scientists to research plant-based and cell-based meats earlier this year.

“It’s more than doubling the amount of open-access research that has been done in all of human history,” says Bruce Friedrich, GFI’s co-founder and executive director. Just a small amount of funding, he notes, “could do a tremendous amount of good to accelerate these technologies.” Another $3.15 million in grants will be awarded later this year.

Less than a year ago, the University of Minnesota opened the first academic research center into plant proteins. Scientists at the Plant Protein Innovation Center will study legumes like lentils and chickpeas as well as lesser-known oilseed crops like camelina and pennycress, all with an eye to developing appealing and environmentally sustainable plant-based foods.

So far, though, the research into alternative meat has been led by industry. Teams of corporate researchers — more than 100 at Impossible Foods and another 65 at Beyond Meat — have improved the quality of plant-based burgers by laboriously identifying the components that make conventional meat appealing and seeking out out their closest equivalents in plants. This is why burgers from Impossible Foods and Beyond Meat have eclipsed older versions of plant-based burgers, which were little more than vegetables mashed into patties that only a vegetarian could love.

Still, there’s plenty of room for improvement. And it’s still not clear what will produce the best alternative-meat burger. Beyond Meat uses pea protein isolate, which is a powder extracted from the yellow pea, while the latest version of the Impossible Burger replaced wheat protein with soy protein isolate, a powder made from defatted, dehulled soybeans. Sustainable raw materials like fungi and algae remain almost completely unexplored, so it’s possible that still-to-be-identified ingredients could further improve flavor or texture, deliver better nutrition, require less land or water to grow, or, importantly, drive down cost. In supermarkets and restaurants, consumers are being asked to pay more for alt-meat than conventional burgers. Burger King’s suggested retail price of $5.59 for The Impossible Whopper, for example, is $1.40 more than the (possible?) Whopper.

As big food companies develop their own meat alternatives, upstarts are counting on research to keep them ahead of competitors. In the first half of 2019, Beyond Meat invested $8.7 million, or 8.1% of net revenues, in research. That’s a much higher percentage than most established food companies spend. “R&D and innovation represent a critical competitive advantage for us,” says Dariush Ajami, Beyond Meat’s chief innovation officer. Impossible Foods is developing a plant-based sausage while Beyond Meat aims to introduce one new product a year. (A solid next step might be a plant-based alternative to pork, perhaps, which is the most widely eaten meat in the world.)

By contrast, the university-based scientists funded by GFI are focused on fundamental problems that face the industry, particularly when it comes to cell-based meat. Growing cell-based meat requires animal cells, a broth in which they can grow, and a molecular scaffolding on which they rest. Each element needs further study. “Our goal is not to get the best product out the door as fast as possible,” says GFI’s Erin Rees Clayton, who oversees the research grants.

At the University of Oslo, for example, researchers led by Gareth Sullivan are developing cell lines that can replicate themselves for animals such as cows, pigs, goats, chickens, ducks, and sheep. Their goal is to create an alternative to existing cell lines, which are costly and hard to obtain, so that it will be easier for more researchers to study cell-based meat.

The producers of clean meat will eventually face tradeoffs, just as the conventional meat industry long has. How will they balance taste and cost? How does nutrition factor in? What about environmental impact?

Peter Stogios, a biochemist at the University of Toronto and a recipient of a GFI grant, is studying the nutrients needed to feed the cells, which include proteins known as growth factors that are essential to sustain tissue culture. “One of the main barriers to growing meat is that soup, that media, which contains the vitamins, minerals, and growth factors, is expensive,” he says. His lab is seeking to determine which proteins will grow tissue faster and at a lower cost.

Still another unresolved question is how to construct the scaffolding that will hold the cell-based meat in place as it grows. At UCLA, Amy Rowat, who oversees a lab that studies cancer cells, is working with different ingredients, including some derived from apples, citrus fruits, and algae, to construct a scaffold with varying degrees of stiffness. Variations will encourage muscle and fat cells to be interspersed in the meat, she believes. “The holy grail is to generate meat that has marbled fat through it as an actual steak would have,” Rowat says.

The producers of clean meat will eventually face tradeoffs, just as the conventional meat industry long has. How will they balance taste and cost? How does nutrition factor in? What about environmental impact?

For now, industry scientists remain focused, above all, on taste. “Deliciousness is really key,” says Lipman, the chief scientist as Impossible Foods. “We’re not going to make an impact if people don’t choose our product.” Beyond Meat and Impossible Foods are also striving to drive down costs.

That should be achievable, most of all with beef. Even cows that have been bred to convert grain into protein can’t manage it efficiently. (They’re too busy being cows. It takes about 30 calories of edible corn to produce one calorie of edible beef.) While conventional beef and chicken today sell for less than their plant-based alternatives, that’s because the meat industry benefits from bigger and more efficient factories, a well-developed supply chain, and billions in government subsidies to corn and soy farmers that help keep the price of those crops low.

Burgers from Beyond Meat and Impossible Foods require dramatically less grain, water, and energy than conventional beef, independent researchers have found. As the science advances, clean meat should cost less, too.

Says Bruce Friedrich of the Good Food Institute: “We can compete on the basis of price, taste, and convenience — and just remove animals from the equation altogether.”

Disclosures: Medium CEO Ev Williams is a partner at Obvious Ventures, which is an investor in Beyond Meat. For a complete list of Obvious’s portfolio, visit here. All original Medium publications have editorial independence.